FREDERICKSBURG, Va. — Judy Shelton has spent her career pushing for free markets and criticizing the far-reaching power of the Federal Reserve — an institution she may join as a governor and could one day lead, given the right chain of events.

Yet Ms. Shelton’s track record is packed with incongruities, ones that have raised eyebrows among Senate Republicans, imperiling her nomination to take one of seven seats on the Fed’s board in Washington. Senator John Thune, Republican of South Dakota, told reporters last week that while Ms. Shelton’s confirmation remained a priority for the White House, she did not yet have the necessary votes.

Ms. Shelton has made contradictory statements about issues of importance to a future central banker: She once pushed for higher interest rates and a return to a gold standard before backing away from those positions as she sought to secure President Trump’s nomination to the Fed and congressional support.

Those inconsistencies extend to her private life, where she has failed to apply her public view that markets and businesses should operate unencumbered and free of government interference to her own backyard.

Over the past several years, Ms. Shelton and her husband have gone to court to block mining projects near their home — a manor on a former plantation outside Fredericksburg, Va., that once served as the Confederate general Stonewall Jackson’s winter camp. While the would-be miners argued that their operations would be good for the local economy, the Sheltons and their neighbors seized on zoning rules to try to block them, arguing they would provide too little benefit to outweigh added truck traffic, lost property value, environmental damage and disruptions to the local peace.

“She espouses this free enterprise notion,” said Emmett C. Snead, who found himself in the Sheltons’ cross hairs when he tried to start a sand mine near their home. “She says one thing in the world, and does a different thing here.”

Mr. Snead owns a farm just up the road from Moss Neck Manor, which Ms. Shelton and her husband have owned since 2005. 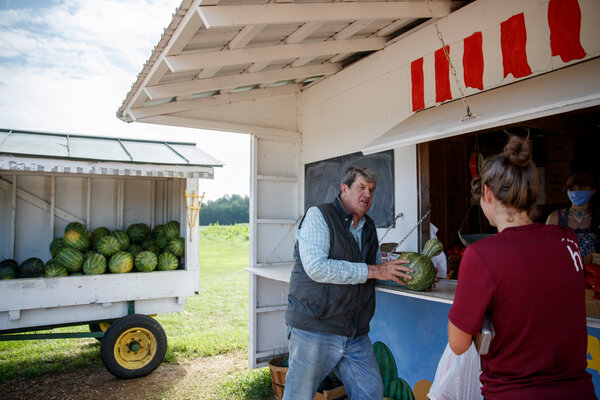 In 2008, Mr. Snead wanted to mine a field he owns for sand and gravel, a hot commodity in this community upriver from the Chesapeake Bay. The land in question sits across from the road that leads to Ms. Shelton’s house, and she and her husband were among a group that filed a lawsuit to prevent him from doing so. The State Supreme Court ultimately decided in Mr. Snead’s favor in late 2013.

Ms. Shelton and her husband have also tried repeatedly to squash other proposed mines that they viewed as a threat to their bucolic community, which borders the Rappahannock River. The Sheltons filed a different complaint against a company owned by another neighbor, Larry Silver, over a project that they argued would detract from their property value and undermine their efforts at historic preservation. The complaint noted that Mr. Silver had also installed a “spiteful” hog farm on his property, which is adjacent to the road that leads to the manor.

Ms. Shelton did not respond to emailed requests for comment for this article.

Local land-use disputes have little bearing on Fed policy, but the disconnect between what Ms. Shelton says and what she actually believes have become an issue in her nomination.

She is a longtime critic of the central bank who has questioned its basic usefulness — asking in a 2009 opinion column, “Why do we need a central bank?” — but she courted a seat at its policy-setting table. She spent years criticizing low rates and easy money, but had a change of heart once Mr. Trump was elected. And though she has been a career-long champion for the gold standard, she downplayed that view during her bid to secure confirmation.

Ms. Shelton’s enigmatic background has fueled concerns about which version of the nominee would show up to the Fed, if she should win confirmation. Two Republican senators — Susan Collins of Maine and Mitt Romney of Utah — oppose Ms. Shelton’s nomination. Senator Lamar Alexander, Republican of Tennessee, has indicated that he would like to wait until after Congress passed a new coronavirus spending package to vote on her nomination.

“My major concern is that I don’t think that she will be independent enough,” Ms. Collins said last week.

If she loses four of the Senate’s 53 Republicans without gaining support from Democrats, she cannot win confirmation.

“We want to help her get through,” Mr. Thune told reporters last week, signaling that Ms. Shelton did not yet have the backing of enough senators. “When it’s right, we’ll move.”

Ms. Shelton has overcome Republican opposition in the past, hurdling early objections from the Senate Banking Committee to advance to the Senate floor on a party-line committee vote. And Mr. Trump still “strongly backs” Ms. Shelton for the board, the White House economic adviser Larry Kudlow told The New York Times last week.

Even some of her onetime legal targets have come around to support her. Mr. Silver said in an email that his problems with the Sheltons had been resolved. “Judy Shelton is a great choice picked by President Trump,” he added.

She has drawn so much attention for a reason. Many economic commentators — including both Ms. Shelton’s supporters and detractors — have argued that she could be a candidate to replace the Fed chair, Jerome H. Powell, if she is confirmed and Mr. Trump wins a second term. Mr. Powell’s term expires in early 2022.

Mr. Kudlow said elevating Ms. Shelton to Fed chair was “never discussed.” If it happened, though, it would put a strident critic of modern central banks at the head of the most powerful economic policy setter in the world.

Ms. Shelton, 66, earned a doctorate in business at the University of Utah and in 1985 joined the Hoover Institution at Stanford University, where she focused on the nature of money and wrote about the coming crash of the Soviet Union (which she advised to pursue a gold-backed ruble).

She began to push for a return to a system in which global currencies could be converted into gold, or some other rules-based monetary system — changes that would have upended the Fed’s modern function, which is to both maximize employment and keep inflation steady. It does so by making money cheaper or more expensive to borrow to guide demand, unfettered by the constraint of gold convertibility.

Her theories were offbeat, even then. Her colleague at Hoover, the famous free market economist Milton Friedman, responded to a 1994 Wall Street Journal column Ms. Shelton had written on stable exchange rates by saying that “it would be hard to pack more error into so few words.”

But her ideas found purchase among a crowd of right-leaning policy thinkers. She spent 1995 and 1996 as a staff economist for the National Commission on Economic Growth and Tax Reform, chaired by the Republican politician Jack Kemp, plunging headlong into the supply-side economic orbit — a group that believed growth could be created by lowering taxes and reducing red tape. The Kemp circle was populated by people like Mr. Kudlow, now the White House’s top economic adviser, and Stephen Moore, once a potential nominee for the Fed board himself and now a fan of Ms. Shelton’s.

“She believes in the idea that we need a monetary system that is pro-growth,” Mr. Moore said in an interview in the summer. “There’s this idea in the media that the Fed is like the pope — that they’re infallible.”

Mr. Kudlow supported Ms. Shelton’s nomination to the Fed and pushed to get her through the Senate Banking Committee, where Republicans initially expressed concern about her changing views.

That included a sharp reversal on low interest rates. Ms. Shelton had written in 2013 that “​loose monetary policy is bad for you and for your economic prospects.”

In 2016, she used an editorial to praise Mr. Trump, who at that time was also critical of low interest rates, writing that the presidential candidate believes that “the low-interest-rate regime engineered by America’s central bank has not stimulated real growth but has rather created a ‘false economy’ that could lead to the next global financial meltdown.” He understood that low rates were unfair because they helped wealthy investors at the expense of savers with interest-bearing accounts, she said.

But when Mr. Trump won election, he began pushing for lower interest rates, and by mid-2019, so was Ms. Shelton. She told CNBC that July that the Fed should not “pull the rug out from under” Americans who were invested in the stock market.

She also reversed course on pushing for a currency anchor. In early 2009, she led a column with the sentence, “Let’s go back to the gold standard.”

When she testified before lawmakers in February this year, she seemed to walk that back. Asked about the gold standard, she said, “I would not advocate going back to a prior historical monetary arrangement,” adding that “money only moves forward.”

Even so, Ms. Shelton’s disavowals of her prior stances are not clear cut.

She has often justified lowering rates on a technical rationale: Ms. Shelton had objected to the Fed’s practice of setting overall rates by paying interest on bank deposits at the central bank. She has at times said she would slash rates to unwind that approach.

And it is not clear that she has completely ditched her support of a gold standard.

She spoke similarly about money moving “forward” in a 2012 interview before offering a detailed plan for how the government could gradually make a transition to a new gold standard by issuing Treasury bonds that eventually converted to the commodity.

“I’m really building on the idea of issuing Treasury obligations redeemable in gold,” she said. “We’re trying to get back to the values, but forward to a new system of making money accurate and reliable once more.”

As recently as 2018, Ms. Shelton made a case that Mr. Trump had hinted at his support for gold, that his administration could undertake global monetary reform, and that doing so would restore “fiscal discipline” — not overspending out of government coffers.

Practically every mainstream economist opposes tying the value of the U.S. dollar to an anchor like gold, and many say it would be economically damaging.

“There would be real costs involved,” said David Beckworth, a senior research fellow at the Mercatus Center at George Mason University, adding that a return to a gold standard would be “destabilizing.”

Jeanna Smialek reported from Fredericksburg, and Emily Cochrane from Washington.