Calvin and Debbie Orr had been saving up for the last five years to pay for a special cruise around the Mediterranean to celebrate their 25th wedding anniversary.

For their first cruise, the couple from Berkshire had booked a 10-day trip through Planet Cruise costing £5,158.

They weren’t surprised when it was cancelled in May, but say they didn’t expect it to be such a battle to get their money back.

Five months on, and they are still waiting.

“In May, we were told to wait up to 90 days (for a refund), which I felt was unacceptable, but had little choice,” Mr Orr, 52, explained.

“After 90 days I called again, waited 110 minutes on phone to be told that there were still delays and they could not give me a timeframe. Communication has been atrocious. We just want our cash back,” he told the BBC.

Planet Cruise, which is headquartered in Portsmouth, has apologised for the delays and said it is ‘taking all possible steps to ensure that customers receive their refunds as quickly as possible.’

Since the couple booked the trip, Debbie has been made redundant from her job.

“Unfortunately this was going to be our first cruise. And with Covid 19, I can’t see us ever booking another.”

A message on Planet Cruise’s website says that it is experiencing “unprecedented volumes in the call centre” with staff trying to process more than 20,000 booking changes. 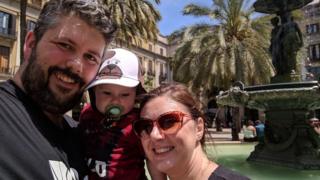 Noeleen Jones from Greater Manchester had her cruise line holiday around northern Europe cancelled in April because of the coronavirus pandemic.

But more than six months on, she is still waiting for a refund.

“Planet Cruise say they are unable to give a refund date,” she said.

“They should be able to tell us when the money will be returned. That rings alarm bells. The last thing they said to me was those waiting over 150 days for refunds are just being contacted now. It has been a nightmare,” she told the BBC.

As a seasoned cruise passenger, Ms Jones was looking forward to her seventh cruise with three generations of her family.

She was due to set sail from Southampton on 13 May with her husband Kevin, their three-year-old son Harrison and her parents for a one-week trip stopping off in Belgium, the Netherlands, Germany and France.

Those plans were ruined when, as the virus spread, cruise companies started suspending operations in mid-March.

She said that the company tried to get her to take a voucher, which she refused, and after months of emails and phone calls she is growing increasingly frustrated: “It can take up to an hour to get through to anyone on the phone. It’s a lot of money and I need it back. I feel lost. I don’t know where to turn.”

The Consumer Group Which? says this is far from an isolated case and has called on the Competition and Markets Authority, the consumer watchdog, to investigate how cruise companies have handled cancellations and refunds.

“Months on from the height of the pandemic that saw travel plans cancelled across the globe, it is unacceptable that some cruise passengers are still waiting for refunds worth thousands of pounds” said Rory Boland, Editor of Which? Travel.

“While delays might have been understandable initially, there is no longer any excuse for leaving passengers out of pocket.”

Under consumer law, if you have a package holiday cancelled by the provider, then a refund should be provided for the whole holiday within 14 days. However, the sheer scale of cancellations due to the pandemic means refunds are taking much longer than usual.

The UK cruise industry, which supports more than 80,000 jobs and generates £10bn for the UK economy each year, has been paralysed by the pandemic.

Many of the major cruise lines have scrapped itineraries until 2021; Cruise ships are moored up around the globe with no passengers and nowhere to go.

In a statement, the chief executive of Planet Cruise, Richard Downs, explained why processing refunds is proving to be more complex and time consuming than normal: “Often we are waiting for funds to be transferred to us by third party suppliers before we can refund the consumer.

“Additionally, each cruise line, airline, accommodation provider and land tour operator has its own set of rules in relation to cancellations, refunds and credits that we have to apply and reconcile the tens of thousands of bookings which have been impacted.”

“We are faced with a constantly evolving and unfamiliar landscape that no one in the travel industry has had to navigate before,” he said. “Where we have failed to communicate effectively to our customers or refund their money within the timescale initially advised, we sincerely apologise. We have learnt from our mistakes and promise to do better by our customers in the future.”

Sean Tipton from Abta, which represents the package holiday sector, said many companies have had to reduce staffing levels and that is further slowing down repayments.

“Cruises are in effect floating package holidays and customers money is financially protected, including through ABTA if they are a member. Customers have been very patient and they have our sympathies,” he added.