London’s transport system is braced to record a £4bn loss this year, underlining the urgency of the capital’s efforts to access emergency funding from the government in order to keep bus and Tube services running.

Sky News can reveal that Transport for London (TfL) has projected the massive annual deficit in its finances as it burns through roughly £600m every month during the COVID-19 crisis.

The financial headache confronting TfL – which is chaired by the London mayor, Sadiq Khan – comes as the authority enters last-ditch talks with the government about rescue funding that Whitehall sources say is likely to amount to more than £1.5bn. 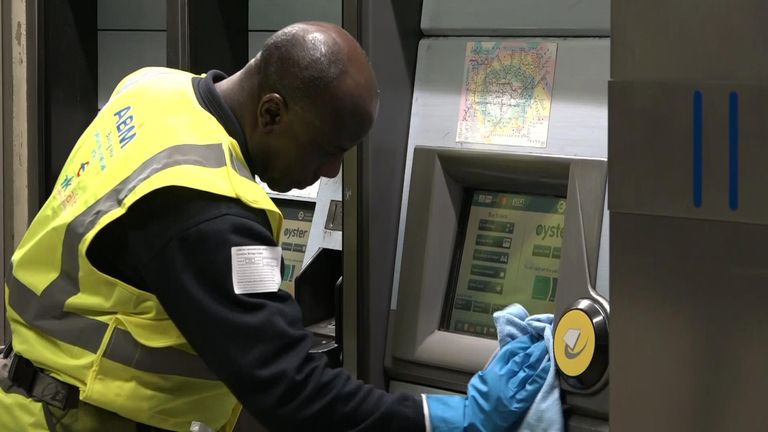 The anticipated £4bn loss was disclosed for the first time in finance committee papers published on TfL’s website ahead of a crucial meeting on Tuesday.

It said it had prepared a proposed emergency budget “as an interim measure until we can propose a revised budget later in the year”.

That would involve “prioritising only what is essential for maintenance of basic services to support COVID-19 government planning and safety-related activities, ensuring our employees and contracted employees remain safe”.

In the finance committee document, TfL said the sum needed to “balance our proposed emergency budget for 2020-21 is around £3.2bn, and TfL is in ongoing discussions around how this should be funded with the Department for Transport and HM Treasury”.

The transport authority has put 7,000 of its staff on furlough, in order to access government money to subsidise their wages.

It has also halted 300 construction projects.

“These savings cannot, however, cover the loss from the steep decline in revenue, which for the full year is anticipated to be over £4bn,” it said.

The finance committee paper said TfL had suffered an overall income loss of around 90% because of the pandemic.

Ministers have little choice but to agree to the mayor’s bailout plea, given the extent to which London’s economy relies on its transport system functioning reliably.

The Sunday Times reported at the weekend that government funding would come with strict conditions attached, including the curtailment of projects such as the proposed extension to the Bakerloo line.

In the document released on Monday, TfL’s finance committee said it had modelled longer term revenue scenarios, adding that it had spent £6bn with suppliers in its current financial year.

“Without a stable source of income or funding during the COVID-19 pandemic our supply chain will not be able to gain adequate assurance that TfL will be able to fund their future commitments,” it said.

News of the full impact of the coronavirus pandemic’s impact on TfL’s finances comes as the network prepares for large numbers of passengers to return on a daily basis following the government’s recommendation that many workers should resume their jobs from Wednesday.

TfL asked commuters to “reimagine their journeys where possible”, including walking or cycling as alternatives to public transport.

“Even with only 5% of journeys currently being made on the Tube, there are certain times and locations where social distancing is already very difficult,” TfL said on Monday.

“The challenge in managing social distancing will become greater as, over time, more people who cannot work from home return to using the network.”