Retailers suffered a “historic” collapse in sales as the lockdown set in as even food retailers reported a slowdown, according to new CBI figures.

The survey reported a retail sales balance of -55, matching a record low seen during the financial crisis in 2008.

It covered the period from 27 March to 15 April – after the start of the coronavirus lockdown on 23 March.

Earlier data from the Office for National Statistics – covering a month-long period up to the start of April – had already started to show some of the impact of the lockdown on the high street, though there was also an upward effect from stockpiling.

The new CBI figures suggest that has now dissipated, leaving a bleak picture across the entire sector. 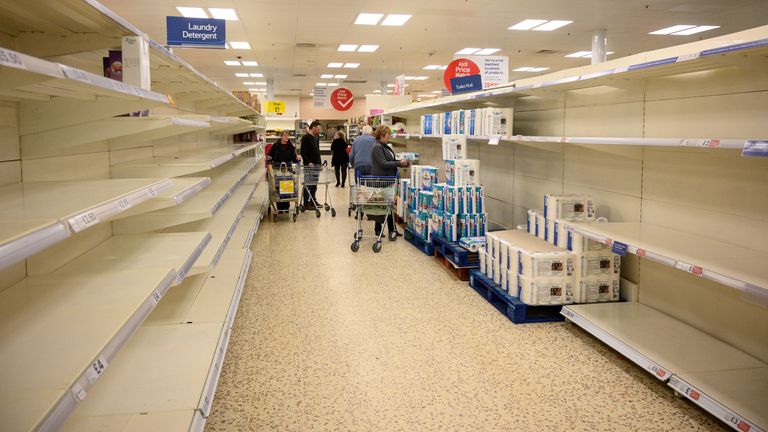 Rain Newton-Smith, the CBI’s chief economist, said the decline in demand for even groceries and other essentials suggested that “households may have been dipping into stockpiles built up prior to the lockdown or tightening their belts more generally as incomes take a hit”.

She added that government support to help pay the wages of staff who have temporarily been let go had provided “genuine relief” to the industry.

“Continued support for retailers to cover their fixed costs will be vital for ensuring that businesses are able to re-open when it’s safe and appropriate to do so,” she added.

The figures showed that for 67% of retailers, coronavirus was having a “significantly negative impact” on domestic sales while 39% reported a total shutdown of UK activity.

They also revealed 96% were having cash flow difficulties with 31% facing “constraints on the availability of external finance”.

The figures came as separate data from the supermarket sector, published by Kantar, showed sales grew by 5.5% in the four weeks to 19 April – apparently in contrast to some of the details in the CBI report.

However, that was a marked slowdown compared to the 20.6% surge seen a month earlier as shoppers stockpiled goods ahead of the lockdown.

In recent days some stores that had previously been closed have started partial reopenings or announced plans to restart trading – notably B&Q which has now reopened more than half of its sites.

Elsewhere, Marks and Spencer has said it has had to adopt “very different” new ways of working and is preparing a “never the same again” strategy as it anticipates a subdued resumption of demand when the lockdown lifts.