Europe’s biggest economies have begun counting the cost to growth from the coronavirus crisis – as leaders across the continent struggle to reach agreement on how to mitigate its impact.

France’s central bank said it had entered recession with an estimated 6% contraction in GDP in the first quarter of the year, while forecasts also predicted a grim downturn for Germany.

But a 16-hour meeting between European leaders that stretched overnight into Wednesday morning failed to reach agreement on how to help the eurozone cope with the damage.

The Bank of France estimate of the scale of the downturn in the January-March period comes after the economy shrank by 0.1% in the fourth quarter of 2019 – and two quarters in a row of decline meets the definition of a recession.

France has been on lockdown since 17 March and the central bank estimates that every two weeks under the stay-at-home orders could reduce annual economic activity by 1.5 percentage points.

Meanwhile Germany, Europe’s biggest economy, is predicted to shrink by 4.2% this year, according to a report by the country’s leading forecasters. 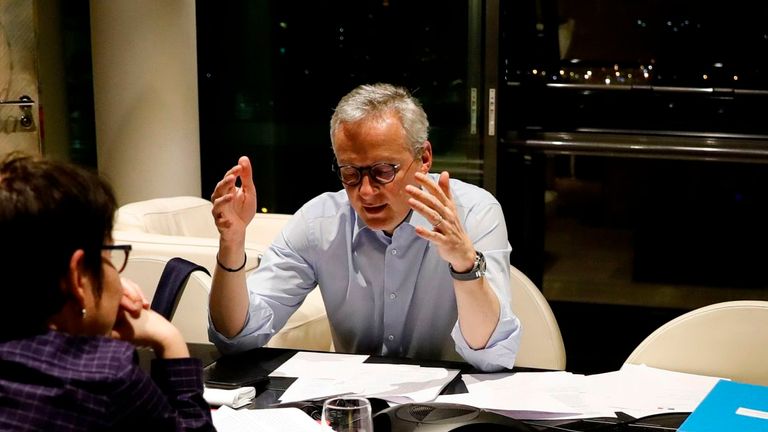 Yet deadlock remains between European leaders about how to save households and companies across the continent from going bankrupt.

A video conference meeting between 19 eurozone finance ministers broke off due to differences over aid conditions and a proposal to issue joint bonds to pay for the crisis.

Talks were due to resume on Thursday.

On the table is a €500bn (£431bn) package, partly consisting of €240bn in emergency loans from the existing European Stability Mechanism (ESM).

But Italy, which has been the epicentre of the crisis in Europe, has rejected the use of the ESM.

That is because it comes with conditions to carry out economic reforms – raising the spectre of the harsh austerity imposed on Greece during the eurozone debt crisis nearly a decade ago.

Italy says that makes the ESM the wrong tool to address the fall-out from the coronavirus crisis, since it is no country’s fault.

Germany has proposed waiving most conditions on the money, but the Netherlands has pushed for requiring reform promises.

German finance minister Olaf Scholz said countries were close to a deal on the bailout loans and other parts of the package – covering credit guarantees to keep companies afloat and support to help companies avoid lay-offs.

He said the position of Germany and other countries was that loans should come with minimal conditions and “should not mean that, as happened 10 years ago, commissars or a troika travel to the countries and develop a program for the long-term”.

Italy, backed by France, Spain and six other countries, had pushed to go even farther than using the ESM and rely on a shared bond issue backed by all countries to raise money at low interest rates and favourable conditions such as long repayment.

But Germany and the Netherlands have resisted common borrowing.