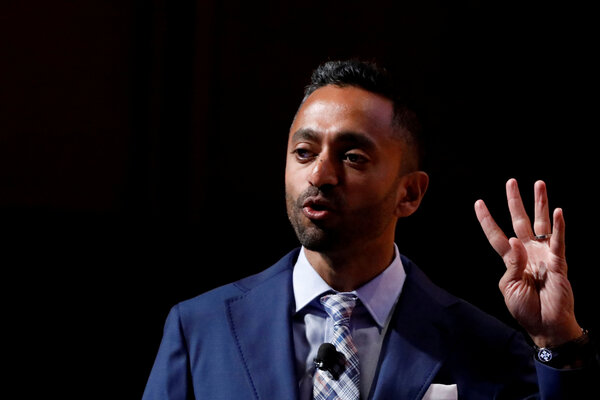 One of the most prominent names in SPACs, Chamath Palihapitiya, faced backlash last week after regulatory filings showed that he had sold his entire personal stake in Virgin Galactic, which he took public through a blank-check fund. (He will stay on as chairman, and will indirectly remain a shareholder through an investment firm that owns a stake in the company.) The news — coming as shares of many SPACs, as well as Virgin Galactic’s, tumbled amid a broader market decline — added to concerns about a blank-check bubble.

Mr. Palihapitiya insists that he’s still right. After describing what he called a “super tough week,” he tweeted: “I re-questioned my goals and concluded my strategic view is still right.” He added that he had sold his Virgin Galactic shares to free up capital to keep investing in companies that address inequality and climate change, themes he said were “a once in a lifetime opportunity.” (He previously told Reuters that he would put the proceeds from the stock sale toward a “large investment” focused on fighting climate change, the details of which “will be made public in the next few months.”)

But the move still raises concerns. Among them: How committed — financially and otherwise — are Mr. Palihapitiya and other SPAC sponsors to the companies they buy with their blank-check funds? And do other investors sufficiently understand the risks associated with these still unproven companies?

Many investors, including some of Mr. Palihapitiya’s 1.2 million Twitter followers, are likely buying shares in the companies he invests in because they believe he is in the project for the long term, and not simply taking advantage of the favorable economics that SPAC sponsors enjoy, regardless of the investment’s success. (We’ve previously reported on how some sponsors are trying to reduce that misalignment.)

His reputation, and those of other SPAC sponsors, are particularly important, given that potential investors are asked to accept lofty projections as part of these deals. Take for example Virgin Galactic: The investor presentation for its 2019 merger with Mr. Palihapitiya’s SPAC forecast that the company would record $31 million in revenue in 2020 and $210 million this year. But Virgin Galactic executives conceded last month the company did “not generate significant revenue” last year.

In other SPAC news: The Bitcoin mining company Cipher and the crowd-safety tech provider Evolv agreed to go public by merging with blank-check funds, while the self-driving trucking start-up Plus is reportedly in talks to combine with one.

Gov. Andrew Cuomo of New York on calls to resign: “No way.” Mr. Cuomo defied a call from the leader of the New York State Senate to step down, after two more women accused him of inappropriate behavior. The once-popular governor is facing a shrinking circle of advisers and sagging poll numbers, as more New Yorkers say they don’t want him to run again.

President Biden’s $1.9 trillion stimulus bill squeaks through the Senate. The economic rescue plan cleared the upper chamber, 50-49, after Democrats trimmed unemployment benefits to assuage Senator Joe Manchin. The bill must now pass the House a second time, which is expected, before Mr. Biden signs it into law.

Oil soars after an attack on a Saudi Aramco facility. Crude oil shot above $70 a barrel for the first time in more than a year, after a drone strike took aim at a petroleum storage tank in a major Saudi Arabian port.

MacKenzie Scott remarries. The billionaire philanthropist announced that she has married Dan Jewett, a teacher at a prestigious Seattle private school, over a year after she divorced Jeff Bezos. Mr. Jewett has pledged to help Ms. Scott in her philanthropic giving, which has been notable for its speed and scale.

Companies are called to weigh in on Georgia voting bills

As Georgia Republicans push through measures that critics say will restrict Black citizens’ voting rights, opponents of the measures are calling on the big companies based in the state to step up their defenses of civil liberties. One of those bills has already passed the House, while another could go to a vote in the State Senate as soon as this week.

Companies have played a role in Georgia civil rights battles before. To bolster its reputation as a national hub for business, the state’s capital, Atlanta, positioned itself as the premier city of the “New South.” Leaders like the former mayor Andrew Young, a civil rights activist and an aide to the Rev. Martin Luther King Jr., appealed to moderate business figures, in part by offering incentives and improving infrastructure as a way to attract companies.

In 2015, businesses like Coca-Cola, Delta Air Lines, Home Depot and UPS opposed “religious liberty” legislation meant to give companies legal cover to avoid hiring L.G.B.T.Q. workers, citing not only company values but also potential harm to Georgia’s business reputation. Many big companies also publicly pledged to work toward racial equity after the killing of George Floyd and others this past summer.

Coke described voting as “a foundational right” and said it supports efforts by the Metro Atlanta Chamber and the Georgia Chamber of Commerce to “help facilitate a balanced approach to the elections bills.”

Home Depot said that “elections should be accessible, fair and secure and support broad voter participation.” It referred to an internal get-out-the-vote initiative and a donation of 9,200 plexiglass dividers across the state to bolster poll station safety.

UPS said it “believes in the importance of the democratic process and supports facilitating the ability of all eligible voters to exercise their civic duty.” It added that it is working with the Atlanta and Georgia chambers of commerce “to ensure equitable access to the polls and the integrity of the election process across the state.”

Delta called voting “a vital part” of the company’s values. “Ensuring an election system that promotes broad voter participation, equal access to the polls, and fair, secure elections processes are critical to voter confidence and creates an environment that ensures everyone’s vote is counted.”

Inspire Brands, the owner of Dunkin’ Donuts and Arby’s and the second-biggest restaurant company in America, did not have a comment.

Mr. Woodall asserted that it is harder now for Georgia-based companies to both tout moderate social policies and cater to local politicians pushing the voting restrictions bills. “Georgia celebrates being the best state to do business,” he said “But that will change if people feel that businesses don’t support them or their lives are literally at stake.”

Ebitda? R.O.I.? A case can be made for E.S.G., the acronym more executives mentioned in their latest quarterly earnings calls than ever before. A quarter of S&P 500 companies cited this shorthand for environmental, social and governance issues in their fourth-quarter calls through last week, according to FactSet — nearly double the count in the same period a year before.

Name-checking E.S.G. reflects the broader concerns of boardrooms, beyond shareholder returns. This is also a result of investors like BlackRock pushing companies to adopt targets on their climate impact, commitment to racial equity and other E.S.G. issues. It also comes as the Biden administration makes E.S.G. an increasingly important regulatory priority.

In short, here’s the status quo, from Martine Ferland, the vice chairwoman of Marsh & McLennan, on a recent investor call:

“We’re watching, of course, the agenda from the Biden administration, but we think that we are well positioned there. In particular, we are very strong in E.S.G., like diversity and inclusion consulting, and also on responsible investment and helping clients address the transition to a low-carbon economy.”

The numbers behind the Harry and Meghan interview

Without a doubt, the biggest event on television last night was Oprah Winfrey’s prime-time interview with Meghan Markle and Prince Harry of Britain. The two-hour broadcast yielded a number of bombshell headlines, but we also wanted to take a look at the big money behind the broadcast.

The broadcaster ITV is said to have paid 1 million pounds ($1.4 million) for the British rights to the interview, according to the Guardian. It is set to air tonight at 9 p.m. British time.

CBS reportedly sought about $325,000 for 30-second ad spots during the broadcast, double the usual rates for that time period.

ITV also asked for up to £120,000 for ad slots during its airing, more than twice the standard rates.

Harry and Meghan received no compensation for the interview. (In the interview, the two said they no longer received money from the royal family, though they’ve signed content creation deals with the likes of Netflix.)

Apollo Global Management agreed to buy Athene Holding, a retirement services affiliate, that will give the private equity giant billions more in capital to invest. (Apollo)

General Electric is reportedly near an agreement to sell its aircraft-leasing business to AerCap in a deal likely to be valued at more than $30 billion. (WSJ)

Instacart is said to be considering going public through a direct listing instead of an I.P.O. (Reuters)

Allies of Prime Minister Mario Draghi of Italy are reportedly unhappy with his hiring of McKinsey consultants to advise on its economic recovery efforts. (Bloomberg)

John McAfee, the founder of the antivirus software maker bearing his name, was charged with running a pump-and-dump scheme on Twitter. (WaPo)

“How Do Silicon Valley Techies Celebrate Getting Rich in a Pandemic?” (NYT)

The C.E.O. of Coinbase, Brian Armstrong, could earn more than $1 million a day after the company’s direct listing, thanks to stock options. (Bloomberg)

The S.E.C. accused AT&T and three employees of improperly tipping off some Wall Street analysts about smartphone sales. The company disputed the charges. (WSJ)

A glimpse of post-pandemic life, according to new ads: making out in tailored clothing and a lot more travel. (NYT)

Jack Dorsey is selling Twitter’s first-ever tweet as a so-called nonfungible token — “NFT” for those in the know — and the highest bid right now is $2.5 million. (CNBC)