LONDON — With flowery carpets, glam rock gold walls and whizzy tech features, Browns has built a store for the future in a 300-year-old building on Brook Street in Mayfair, on the corner of Avery Row.

The new Browns, a few minutes’ walk from the retailer’s original South Molton Street site, will show its face to the world on April 12 when lockdown begins lifting here, and stores and salons open once again.

Located in the former Colefax and Fowler building not far from Claridge’s, the store has been a long time coming: Its relocation and redesign was first revealed in 2019, and it was set to open in 2020 to mark its 50-year anniversary.

COVID-19 dampened those plans, and three lockdowns later the store is finally opening with a clever mix of old and new, a restaurant with ancient Roman flair, a lush and fragrant courtyard and luxury fashion displayed on screens and minimalist metallic racks.

Holli Rogers, Browns’ former chief executive officer who has recently been promoted to chair, said she wanted the store to be a sensual feast for fashion lovers, and others.

“I think we’re going to have lots of people coming through the store for different reasons, and I actually love that. They may not even care about the clothes,” said Rogers, who is also chief brand officer for Browns’ parent Farfetch.

Interior design fans will want to check out Dimorestudio’s vision for the space. Rogers hired the hot Milanese firm to redesign the store and create a mood that was homey, relaxed and sympathetic to the building’s long history.

“They had an aesthetic that I thought really suited the space, and they seemed the most adept at bringing the past and the future together,” said Rogers. The building has 300 years of life and we didn’t want to squelch that. We didn’t want to put up a box to cover it up, or get rid of all the signs of life that have existed in there. And we didn’t want to marble-ize anything.”

The store spans 9,180 square feet, roughly the size of the old Browns, which was a cluster of five townhouses, all with separate leases, making it difficult to make major alterations. While the old store may have been cozy and charming, it could sometimes feel like a maze with some rooms difficult to find.

Rogers said that when Grosvenor, one of England’s largest property owners and a major Mayfair landlord, said that Colefax and Fowler, which had occupied the site for 75 years, had moved, she jumped at the chance to take over the site.

“We were given a gift. How could we say no? Nobody in luxury retail has been in there, so it will be the Browns store forevermore. And we have that incredible courtyard, the outdoor space.” Rogers said being able to open a restaurant on site was another bonus.

Just off the central courtyard is Native, a restaurant with interiors that nod to ancient Rome, with mosaics on the floor and a large baptismal-like font in the corner. It serves up seasonal, sustainable food, some of it foraged.

It will serve all day, offer teas made from foraged leaves, and even a wine of the week, chosen by Native’s founders Ivan Tisdall-Downes and Imogen Davis. Guests can also dine in the courtyard, sitting at emerald-green tables while gazing at the cherry tree and the greenery.

Rogers said she wanted a laid-back approach to dining. “There are no table linens or those sorts of things — it’s more in line with who the Browns customer is.”

The store itself spans four floors united by a central staircase with an atrium. The main entrance opens straight into The Focus, Browns’ traditional space for emerging brands, capsule collections and collaborations.

The Focus is awash in gold tones, metallic finishes and horizontal bars of light suspended from the ceiling, Donald Judd-style. It will open with a Marine Serre collaboration. The ground floor also features a dedicated sneaker room, covered in cerulean blue carpeting with a flower and garland pattern.

Men’s and women’s wear are on the upper floors, while the top floor will focus on VICs, or very important customers. One of the VIC rooms is dedicated to Joan Burstein, the store’s founder, former owner and honorary chair. Browns has installed a kitchen, pre-party “getting ready” areas with mirrors and sinks, and suites earmarked for private fittings or events.

“We want these shoppers to come and linger. I envision people having parties, or small gatherings, up there, and there’s no reason why you wouldn’t want to get lost in that world and enjoy it,” said Rogers.

Asked about the appetite for physical shopping once lockdown begins to lift this month, Rogers said she’s expecting consumers to be enthusiastic, but cautious.

“Consumers’ mind-sets about shopping will change. I think they’ll be thrilled about being able to do it, but there will be a pensiveness. If you are still trying to be careful, you’ll want to give your time to the spaces that mean the most to you,” said Rogers.

“A store’s physical environment really has to speak to who you are as a company, the values you hold, what’s important to you as a business and then you have to give people the best, most inviting environment that you can,” she added. 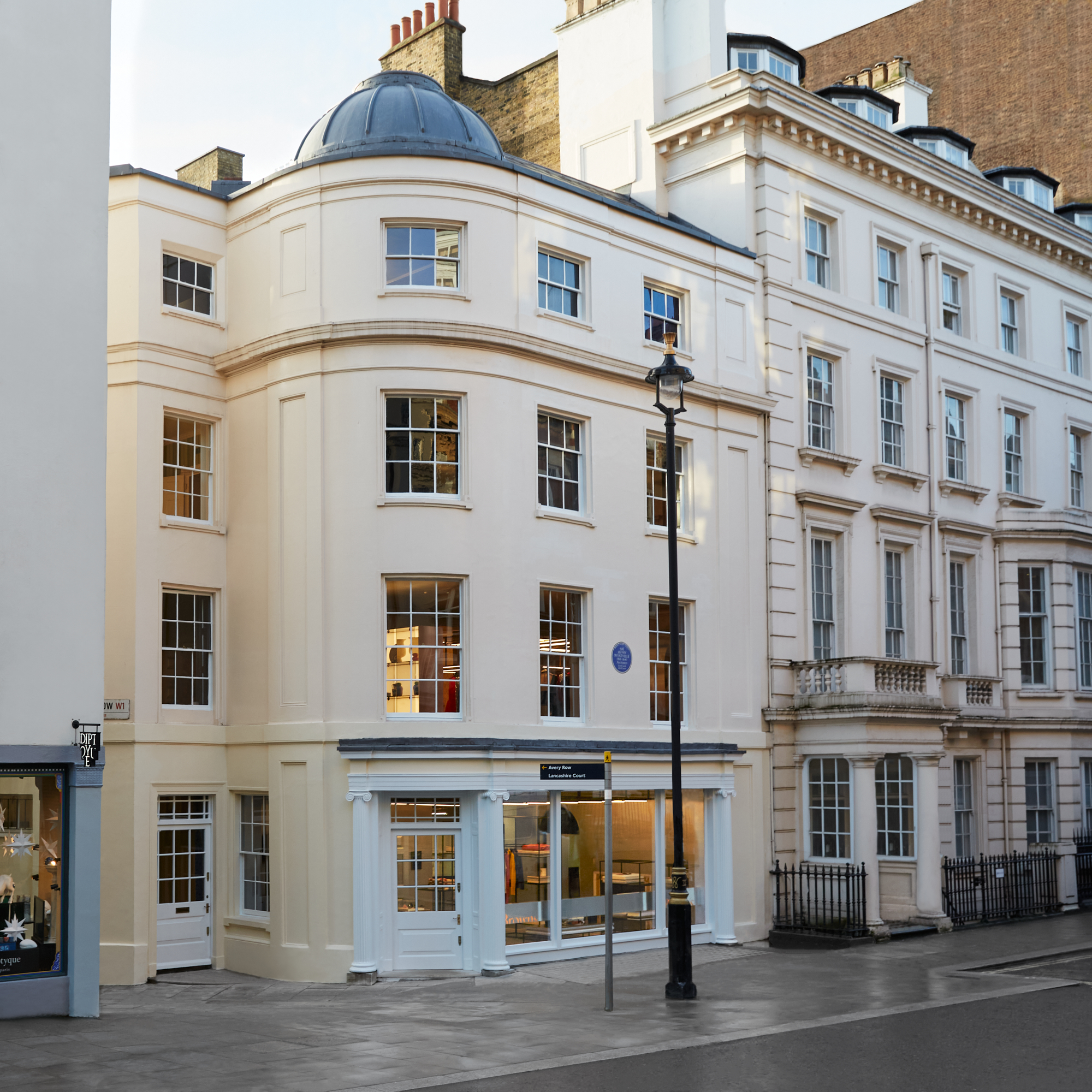 Rogers said the small events room at the Brook Street store is a good example of Browns’ efforts to engage customers.

“There will be something different to explore every couple of months,” whether that’s breathing and meditation, art or entertainment projects. A Juno Calypso installation will open with the store in April. The store will also offer residencies for tattooing, nail art and different therapies.

“The emotional feeling is really important in physical retail because you can’t replicate it online. You want people to feel like they’re at home,” she said.

From an interiors point of view, Rogers said she wanted to celebrate the original flooring, wallpaper and artwork that Browns inherited with the new space. On the stairs, and in some of the rooms, the floorboards are straight out of a Jane Austen novel — squeaky and stripped bare — while upstairs the original, and now faded, wallpaper is peeling.

Colefax and Fowler, the home fabrics and wallpaper company, had occupied the building for more than seven decades. At the back, there was also an apartment belonging to Nancy Lancaster, the American-born decorator, garden designer and tastemaker who shaped English country house style. Before that, the architect Sir Jeffry Wyatville occupied the building.

“Lots of people will think we’ve missed the stairs and wonder why there isn’t a runner. But we wanted it to stay the same. We also had to be careful with some of the [old] wallpaper, so that children don’t peel it off,” said Rogers.

Not all of the wallpaper is old — some rooms are covered in paper hand-painted with flowers or delicate swirls.

Rogers noted that the Flemish paintings embedded in the walls upstairs are original, “so we needed to figure out how to integrate them into the store. Dimore totally embraced it — I love their mix of old and new. There’s a kind of rock-star sensibility to what they do.”

Dimore — which has worked on projects for retailers such as Excelsior Milano, Pomellato and Aesop in Milan; Fendi and Frette in London, and Cire Trudon in Paris — is known for its Italian midcentury aesthetic, its rich, dense color and opulent fabrics.

Emiliano Salci, creative director and cofounder of Dimorestudio, said it was looking to create a “cultured, elegant and dynamic space, featuring venerable finishes and a contemporary atmosphere.” The studio drew ideas from the arts world, he added, and in particular minimalist artists Donald Judd and Carl Andre. The sculptor Fausto Melotti’s work was also an inspiration, as were “the architectural constraints we encountered” in the centuries-old building.

There is no greater example of Dimore’s fusion of old and new than the Yellow Room of the new Browns store. It’s a vast space that was once Lancaster’s lavish drawing room, which she decorated in the ’50s. Dimore kept the original features and the room’s distinctive butter yellow color, and added a jungle gym of slim metallic bars — architectural features doubling as clothing racks.

Moving to the new space also gave Rogers and the team, including Sandrine Deveaux, executive vice president, Future Retail at Farfetch, the opportunity to enhance the merchandising, customer service and offer from a tech point of view.

Rogers said the new store will highlight “the best-of-the-best” and also offer portable digital displays so that customers can peruse the entire edit.

Via the Browns Fashion app, customers can virtually try on fine watches and sneakers in store — or anywhere they want. They can also use the app to scan product on the shop floor, see whether the store has anything on their wish list and book appointments and services.

The dressing rooms all have “connected mirrors,” which are able to suggest products from the shop, or the Browns site. If clients have an account, sales associates can pull up their recently viewed items or wish lists and work with clients directly from the dressing room.

“However you may want to shop, fast or slow, connected or not, it’s entirely up to you. We will accommodate your needs,” said Rogers, adding that the team has been applying what it’s learned from Browns East in Shoreditch, which opened in 2017. The 4,000-square-foot unit on the corner of Club Row and Redchurch Street also looks to fuse digital with physical retail.

“We’ve been testing and learning in the Shoreditch store for a while now. We always start with the customer — and we look at what can complement the journey they are taking. The whole point of having technology is to be with them wherever they are, to make it convenient for them,” Rogers said.

She said customers might be starting their journey at home, on the desktop, or doing virtual try-on of watches in the cab ride over to the store. Some will choose to connect with the sales associates in-store via the app. “We’ve been honing the technology — it’s really meant to be complementary and subtle, not to be overwhelming or gadget-y at all.”

Deveaux said Browns was able to integrate the new technology in a way that “puts the customer at the center of the experience, enhancing their time in the store, but also ensuring they can connect with the Browns experience before they even arrive.”

She added it’s important for retailers to be thinking in a “channel-agnostic” way and that technology “should just enhance the in-person and human experience — that’s what we believe we’ve achieved with Brook Street.”

Not all of the innovation is tech-related.

“There’s really such an antiquated view on how one ‘has’ to do retail. Some would say that your website is your window, so we’ve decided to use our windows in a different way,” said Rogers, adding that Browns made special security shutters on the inside of the store, and they liked them so much, “we decided that we’re going to leave them in.”

She likes the idea of people on the street being able to have a peek inside the store. “And, right now,” she said, “everybody wants to discover something new.”