The U.S. trade representative will call for stronger worker protections in trade policy as the administration looks to curb the negative impact of globalization. 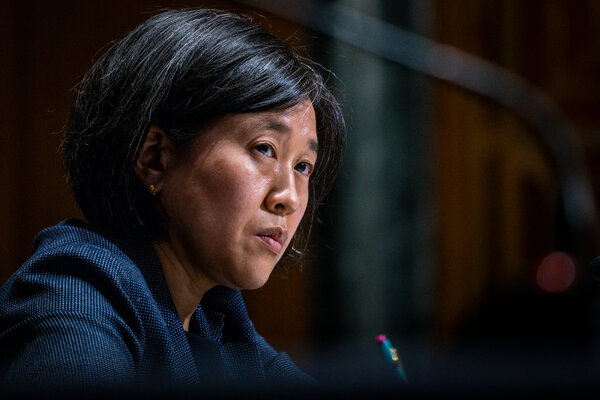 Katherine Tai, the United States trade representative, will emphasize in a speech on Thursday that America is focused on protecting workers through trade policy and that it will try and push trading partners to lift wages, allow collective bargaining and end forced labor practices.

The speech, Ms. Tai’s first significant policy address, is expected to highlight the Biden administration’s goal of re-empowering workers and minimizing the negative effects of globalization, which has encouraged companies to move jobs and factories offshore in search of cheaper labor and materials.

Less clear is how the administration will, in practice, accomplish those goals.

“For a very long time, our trade policies have been shaped by folks who are used to looking at the macro picture — big economic sectors,” Ms. Tai said in an interview ahead of the speech, which she will deliver at an A.F.L.-C.I.O. town hall. “We’ve lost sight of the impact of these policies, the really real and direct impact they can have on regular people’s lives, and on our workers’ livelihoods.”

According to a copy of her prepared remarks, Ms. Tai will portray the administration’s push as trying to correct for decades of trade policy that put company profits ahead of workers and helped erode worker power in the United States.

“A worker-centered trade policy means addressing the damage that U.S. workers and industries have sustained from competing with trading partners that do not allow workers to exercise their internationally recognized labor rights,” she is expected to say. “This includes standing up against worker abuse and promoting and supporting those rights that move us toward dignified work and shared prosperity: the right to organize and to collectively bargain.”

Ms. Tai will emphasize that the United States is already enforcing worker protections in the new North American trade agreement and trying to curb forced labor in the fishing industry at the World Trade Organization.

On Wednesday, the Biden administration made its second request in a month for Mexico to review whether workers at two separate auto facilities were being denied the collective bargaining rights that were agreed to under the terms of the United States-Mexico-Canada Agreement.

“These enforcement actions matter,” Ms. Tai will say in her speech, noting the aim is to “protect the rights of workers, particularly those in low-wage industries who are vulnerable to exploitation.”

Last month, the administration submitted a proposal to the World Trade Organization aimed at curbing “harmful subsidies to fishing activities that may be associated with the use of forced labor, such as illegal, unreported, and unregulated fishing.”

Still, it remains to be seen how — or whether — the United States will effectively push for stronger labor standards outside of North America. Ms. Tai’s speech does not say directly how the administration will try and encourage some of its biggest trading partners, like China, to adjust trade practices.

When it comes to China, she suggested that the goal was to work with other countries that have economic structures similar to the United States’, pairing with allies to “put ourselves on stronger competitive footing, to compete for the industries of the future.”