At one end of the table, one enthusiast is meticulously laying out Lego pieces ready to construct a James Bond car.

At the other end, a game is being played where each participant adds another block to create a funny looking figure.

Little is unusual about this imaginative play – except that everyone taking part is middle-aged.

They are members of Brighton Bricks, a group of adult Lego fans who meet up to talk, play and swap collections every month in a pub on the south coast.

“There is nothing wrong with simply playing with it. It is a toy. As an adult, it is still quite a bit of fun setting off the ejector seat on the Bond car,” says Nick Bright, the group’s 43-year-old leader.

“As a kid I was a massive fan of Lego, then I fell out of it. As an adult, the collection of mini-figures returned me to it.” 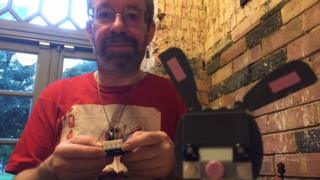 Manufacturers and retailers are tuning in to the trend of adults buying games, toys and puzzles. Out of every £9 of toy spending, £1 is spent by adults buying something for themselves, research by analysts NPD has found.

There is a marketing word for these people – kidults, although that seems rather harsh. Some are building spectacular, and technical, displays with these toys.

Frederique Tutt, global industry analyst at NPD, says toys have become more sophisticated, from board games to drones, and collectable toys have expanded from traditional dolls and action figures into pop culture.

Yet one major reason for the popularity of toys among adults is that we all just need a break.

“Rather than a nostalgic trend, I’d say much of this is providing an escape from the stresses and strains of modern-day living, fulfilling our need to find downtime,” she says.

That theory holds some water at Brighton Bricks, where some of its members have found building Lego helps reduce or ward off anxiety.

“I will sit at home, stick a film on and build a Lego model of an evening. It is a nice way of occupying myself,” says engineer Jon Derbyshire, 49.

Fellow member Lizzy Dingemans, 50, says the hobby makes her much calmer. It helps too with her dyspraxia – a disorder that affects co-ordination and movement.

Building sets, such as Lego, are the most popular toys for adults as a whole.

At the upper end of the age range – among grandparents, rather than parents – there is a more popular pastime.

Visit the Orpington and District Model Railway Society in picturesque Pratt’s Bottom and it is easy to see why.

The club has nearly 60 members, with an average age of 65, each paying an annual subscription of about £80. The youngest is 44, the oldest in his 90s.

Chairman Paul Shallcross says that it would be too easy to stereotype the middle and older age men – there is only one woman – in the club which was established nearly 60 years ago.

Some are creative and artistic, others are attracted by the exact modelling – adding a tiny spike into every single sleeper – while many love the electronics that can become quite advanced in a large display. One member even has his own narrow gauge railway to transport firewood across his garden.

All of them enjoy the camaraderie.

“It is socially significant. Some of our members could have been lonely,” says Mr Shallcross, in the tea room of the club’s premises tucked alongside the village hall while his fellow members work on an exact replica of Swanley Junction.

“Everyone had a set as a kid, no computer games,” he says. “Some were brought up with steam trains.”

Now they all work towards a public exhibition once or twice a year. This, in part, is a way to sell this traditional pastime to the young, connected generation.

“Model railways and Scalextric have moved with the times,” says Mr Shallcross, 64. “Each engine has a chip in it that is controlled from an iPad.”

The attraction for youngsters, he says, is seeing how all this works and making their own. The soldering and the artistic skills, the safe use of hand tools, and the microelectronics are all “fantastic for the younger generation”, he says.

Most of all, he says, it is fun – and something that the youngest and oldest generations can enjoy together.

That would be music to the ears of any toy manufacturer wanting to crack the market for kids and kidults alike.