Hundreds of millions of people are stuck in cities around China during this Lunar New Year holiday, as coronavirus restrictions put a halt to a travel season that is usually the world’s largest annual migration. Instead, they are going to the movies — and powering a blowout resurgence at the box office.

“Detective Chinatown 3,” the latest installment in a long-running buddy cop series, raked in an estimated $397 million over three days, according to Maoyan, which tracks ticket sales in the country. That set a world record for the largest opening weekend in a single market. The previous record-holder, “Avengers: Endgame,” took in $357 million in its weekend opening in the United States and Canada in 2019.

The strong showing was a forceful reminder of the power of the Chinese consumer. While the Chinese economy has come roaring back as the country has largely tamed the coronavirus, shoppers and moviegoers have been slower to open their wallets.

Now, people like Sophia Jiang are ready to spend, even on a movie that has received tepid reviews.

Over the Lunar New Year holiday, Ms. Jiang, a 40-year-old freelance writer, would typically go with her parents to their hometown in the northern province of Jilin. But the authorities imposed restrictions on visits to ancestral homes this year to stem any coronavirus outbreaks. Photos circulating on Chinese social media showed eerily empty railway cars at a time when travelers are usually packed shoulder to shoulder.

Stuck in the southern city of Shenzhen, Ms. Jiang has gone to the movies three times so far during the seven-day holiday, which ends on Wednesday. “Detective Chinatown 3,” she said, was the worst of the bunch.

“The story wasn’t that bad,” Ms. Jiang said, “but it wasn’t particularly amazing either, and I fell asleep twice.” 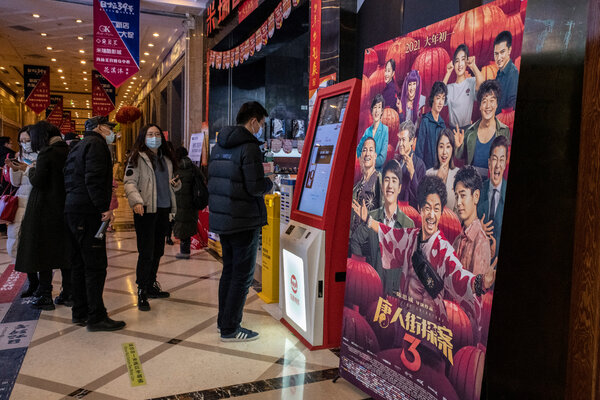 Quality aside, China’s booming box office returns offered a promising sign for the global film industry, which has seen movie theaters large and small decimated by the pandemic and has been racked with concerns about the future of moviegoing.

By Tuesday morning, China’s total box office takings for the new year had reached $1.55 billion, according to local box office trackers. By contrast, total ticket sales last year in the United States, where many theaters are hanging on for survival, totaled $2.2 billion.

“Some have argued that, during the pandemic, people have become accustomed to watching online entertainment at home,” Jane Shao, president of Lumière Pavilions, a Chinese movie theater chain, said in a telephone interview. “But I think this is proof that movie theaters are an effective venue for social gatherings.”

Ms. Shao, who oversees 40 cinemas across 26 cities in China, said the Lunar New Year box office returns were like “night and day” compared to last year, when the outbreak of the virus in Wuhan prompted the government to close theaters at the start of the holiday. Recovery had been slow, she said, but the recent numbers have been encouraging.

“It was a devastating year for our industry, but people have been thrilled to come back to the theaters,” Ms. Shao said.

“Detective Chinatown 3” had initially been slated for release during last year’s holiday. China’s theaters for the most part reopened in July, but most have been limited over this month’s holiday to 75 percent seating capacity, and only 50 percent in areas like Beijing, which have recently seen small outbreaks.

Theaters have been instructed not to sell concessions, further eating into profits. Movie ticket prices over the holiday were higher than usual, helping to overcome the gap.

The film features two bumbling detectives, played by Wang Baoqiang and Liu Haoran, who go to Tokyo to investigate the murder of a powerful businessman. Online, audiences criticized its excessive product placement advertising, scenes of abuse against women and scattered plot threads. But the movie benefited from the strong brand recognition of the “Detective Chinatown” franchise.

The Lunar New Year holiday has traditionally been a coveted window for film releases, and moviegoers had a more diverse selection to choose from than in past years. Coming in second place over the weekend was “Hi, Mom,” a time-travel comedy that grossed $161.9 million, according to Maoyan. “A Writer’s Odyssey,” an adventure film, took third place, with $48.4 million.

Rudolph Tang, 41, a classical music critic, said he had seen all three. But he said he felt especially compelled to watch “Detective Chinatown 3” in part because he remembered seeing a poster for the movie on the facade of the historic Grand Cinema in Shanghai at the height of China’s coronavirus outbreak a year ago, when the normally bustling streets had been emptied and cinemas closed.

“Seeing the film brought back a lot of memories of the hardship that people have been through,” Mr. Tang said in a telephone interview. “I felt like I was making a statement that the scar has healed in China and that people can return to cinemas now and watch movies.”

Last year, box office revenue totaled $3.13 billion in China, making it the world’s largest movie market, ahead of the United States. But it is not clear whether the Chinese film industry’s early momentum this year can propel it beyond its performance of 2019, when it posted $9.2 billion in sales.

China’s box office success will depend partly on Hollywood’s pace of recovery. Though domestic productions have been on the rise, China still has a large appetite for Hollywood films, and many theater managers are hoping that titles like “No Time to Die,” the latest Bond film, and Disney’s “Black Widow” stay on schedule for theatrical releases later this year.

It is also unclear what role the unique circumstances of this year’s Lunar New Year holiday might have played in the weekend’s impressive box office performance. Air travel was down 72 percent in the first week of the holiday travel period compared to the same time last year, according to Chinese state media. Train travel was down by 68 percent in the first two weeks of the travel season compared to last year.

Still, the phenomenon of going to the movies over the Lunar New Year holiday appears to be here to stay.

“Celebrating Lunar New Year in China has traditionally meant setting off firecrackers, eating dumplings and watching the Spring Festival Gala,” said Yin Hong, a film professor at Tsinghua University in Beijing. “Now, more and more, going to the movies with family is being incorporated into that tradition.”