Aleksei Navalny, coronavirus lockdowns, life on Venus: Here’s what you need to know.

We’re covering the damage lockdowns have done to major economies, the poisoned dissident Aleksei Navalny’s plan to return to Russia and what could be a sign of life on Venus. 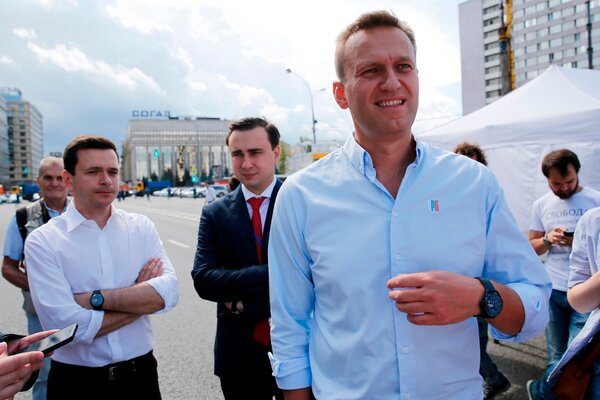 Aleksei A. Navalny, the poisoned Russian opposition leader who is recuperating in Germany, has told a German prosecutor that he plans to return to Russia as soon as he has recovered. “He’s not planning to go into exile in Germany,” a security official said. “He wants to go home to Russia and he wants to continue his mission.”

Further tests have confirmed that the substance used to poison Mr. Navalny was a form of the nerve agent Novichok, the German government announced on Monday, providing additional confidence that the Russian state was involved. Russian officials, for their part, have insisted that there was no proof that Mr. Navalny had been poisoned and suggested several alternative theories, including a drug overdose and low blood sugar.

Repercussions: The attack on Mr. Navalny puts more strain on the close, complicated and increasingly contradictory German-Russian relationship. Chancellor Angela Merkel of Germany, who until Mr. Navalny’s poisoning generally spoke to President Vladimir Putin of Russia once a week, has been unusually clear in her sharp condemnation of Moscow.

The damage to the world’s major economies from coronavirus lockdowns has been more than four times more severe than the impact from the 2009 global financial crisis, according the Organization for Economic Cooperation and Development. Severe restrictions caused an “unprecedented” blow to growth in the second quarter in almost every country except China, where the virus was first detected.

Growth in the Group of 20 nations (which account for 80 percent of the world’s economic production) fell by a record 6.9 percent from April to June compared with the previous three months. The biggest growth declines were in India (minus 25.2 percent) and Britain (minus 20.4 percent), while growth in Europe shrank by nearly 15 percent.

The O.E.C.D. warned that the global economy will fare far worse if a second wave of virus outbreaks leads governments to renew wide-scale quarantines.

Here are our latest updates and maps of the pandemic.

Ethiopia, which has some of Africa’s highest numbers of cases and deaths from the coronavirus, formed a partnership with a Chinese company to increase testing capacity.

The French cities of Marseille and Bordeaux significantly tightened restrictions on public gatherings on Monday.

Silvio Berlusconi, the former Italian prime minister, left a Milan hospital on Monday, nearly two weeks after he was admitted for pneumonia caused by Covid-19.

Antarctica is the only continent without a single reported virus case, but an influx of researchers is expected in the coming months.

Russia and China have already started vaccinating under emergency use measures, and the countries are making international deals to sell their experimental vaccines.

Is there life on Venus?

Astronomers have detected a chemical in the toxic atmosphere of Venus that could be a sign that something is alive in one of the solar system’s most inhospitable environments.

The chemical, a gas called phosphine, is produced on Earth by anaerobic life, microbial organisms that don’t require or use oxygen. The team of scientists says Venusian life is the best possible explanation for its presence, but other researchers argue that the phosphine could be the result of unexplained atmospheric or geologic processes.

Buckle up: The news has some planetary scientists itching to return to the sun’s highly inaccessible second planet. “By God almighty, forget this Mars nonsense,” one scientist said. “We need a lander, an orbiter, we need a program.”

If you have 7 minutes, this is worth it

Disney had hoped to make a splash in China, the world’s second-biggest film market, with its $200 million remake of “Mulan.” But the response there has been lukewarm at best.

Chinese moviegoers pointed to historical inconsistencies. Many grumbled that the “real” Mulan, who in the original poem came from China’s northern steppe, would never have lived in a tulou, the round, earthen traditional homes of the ethnic Hakka people in the far south. The filmmakers were trying too hard to pander to China, viewers said, and did not try hard enough to get their historical facts right.

Brexit: Politicians in the U.K. voted to advance Brexit legislation that the government admits would violate international law.

Japan leadership: Yoshihide Suga — the longtime chief cabinet secretary to Shinzo Abe, the outgoing prime minister — swept an election for the leadership of the governing Liberal Democratic Party, all but assuring that he will succeed Mr. Abe in the coming days.

War crimes in Yemen: U.S. officials are worried about the legal implications of Washington’s support for Saudi Arabia and the United Arab Emirates in their disastrous war in Yemen. American equipment has been used in attacks that killed thousands of civilians.

TikTok: ByteDance, the Chinese owner of TikTok, has chosen Oracle to be the app’s partner for its U.S. operations, rejecting an acquisition offer from Microsoft.

Snapshot: Above, rescue workers in southern Oregon. Wildfires across the West have burned more than five million acres, destroyed scores of homes and left at least 24 people dead. “It’s the worst thing I’ve ever seen,” one Oregon resident said.

Lives lived: Vasilis Dimitriou, one of the last movie billboard painters in Europe, died at 84 last week, after creating more than 8,000 works for Greek theaters.

What we’re reading: This series of articles in Eater celebrates snacks in all of their sticky, crunchy, salty glory. Jillian Rayfield, an editor, writes: “I too have had one too many Auntie Anne’s pretzels at the sad Penn Station location, and I’m glad it’s getting its due.”

Watch: “Nomadland,” a film written and directed by Chloé Zhao, won the top prize at the Venice Film Festival. The drama stars Frances McDormand as a woman living a nomadic existence across America.

Listen: Bruce Springsteen’s “Letter to You” and Sidi Touré’s “Wakey Kama” are on the latest playlist from our pop critics.

You’re stuck indoors — but there’s still plenty to do. Our At Home section has ample ideas for what to read, cook and watch.

The future of fashion

New York Fashion Week is in full swing, with most of the shows going digital because of the pandemic. Vanessa Friedman, our chief fashion critic, writes that there is “angst in the air” as the world of fashion looks to the future. She discussed this with four people in the thick of it all: Tory Burch, of the namesake brand; Virgil Abloh, of Off-White and Louis Vuitton men’s wear; Gwyneth Paltrow, of Goop; and Antoine Arnault, of LVMH. Here’s an excerpt.

Vanessa: Do you think this marks a tipping point in fashion?

Antoine: A lot is going to be decided after the next couple of rounds of shows. Showing is definitely not essential. However, you sometimes need to show what you’re actually creating.

Virgil: We’re looking at a watershed moment for the next generation to really take their seat. We know the names of Karl Lagerfeld, Margiela, Yves Saint Laurent — how they revolutionized the industry by switching from couture to ready-to-wear. In my generation, we brought streetwear into the fold, and now we see its effect on the luxury market. I think this is a moment where we can redefine what fashion means.

Vanessa: Is it true that sweatpants now rule the world?

Tory: Obviously people are dressing more casually, but what’s interesting to me is that people are buying across categories. I don’t know where they’re going, but they’re buying things. Whether they’re dressing for Instagram or small parties or whatever, they’re looking at fashion in a way that’s helping them escape.

Gwyneth: We just had a dress launch, and we were nervous about the timing, but I was surprised at how well they did. It’s been interesting to see where people’s focus has gone from a lot of loungewear and home workout products to cookware to home and now back into fashion.

That’s it for today’s briefing. Until next time.

To Theodore Kim and Jahaan Singh for the break from the news. You can reach the team at [email protected]

P.S.
• We’re listening to “The Daily.” Our latest episode is about a new documentary that examines the operations of Immigration and Customs Enforcement.
• Here’s our Mini Crossword, and a clue: “Whole bunch” (four letters). You can find all our puzzles here.
• The word “smized” first appeared in The Times on Monday, according to the Twitter account @NYT_first_said.
• Isabella Kwai, who worked in our Australia bureau and previously wrote the Europe morning briefing, is joining our London newsroom as a breaking news reporter.