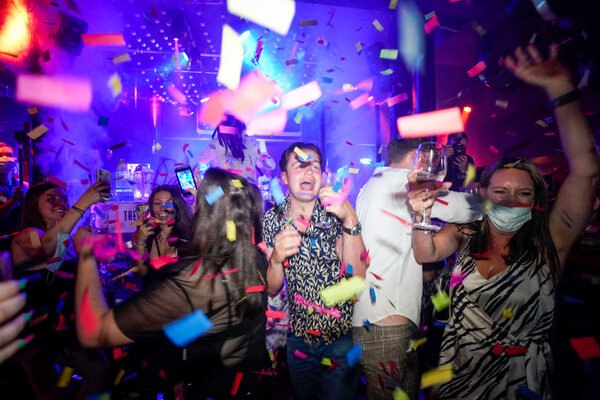 An average of almost 45,000 cases of the coronavirus per day were reported in the U.K. in the past week, an increase of 83 percent from the average two weeks ago. Deaths have risen by 141 percent, while England’s chief medical officer warned that hospitalizations were doubling every three weeks and could hit “scary numbers.”

Despite these troubling statistics, England will lift its final restrictions today, even as more than 500,000 people in the past week were told to quarantine by the National Health Service’s test-and-trace app after having come into contact with someone who tested positive for the coronavirus.

Prime Minister Boris Johnson and his top finance official, who both had contact with an infected cabinet minister, are among those now in quarantine. Downing Street initially said yesterday that they would avoid a quarantine, prompting a swift and ferocious backlash from critics who accused them of a double standard.

British politics: Johnson is under fire for refusing to condemn crowds who booed England’s national soccer team for kneeling to protest racial injustice. His refusal is a distinct echo of former President Donald Trump’s targeting of N.F.L. players who knelt for the same cause in the U.S.

Indonesia, the fourth most populous nation, now has the world’s highest count of new coronavirus infections, with 57,000 new cases reported on Friday. Experts estimate that the true number is three to six times as high.

The American tennis star Coco Gauff has tested positive for the coronavirus and will not compete in the Tokyo Olympics, adding to the first cases inside the athletes’ village.

After scandals and outrages, overburdened host cities and now a pandemic, some are wondering whether the Games are worth the trouble.

Some local governments in China have begun requiring that all students — and their families — be vaccinated before the students can return to school in the fall.

Chancellor Angela Merkel of Germany met yesterday with people who lost their homes in catastrophic floods last week, as volunteer rescue teams and German Army troops continued to search for survivors. “The German language has no words, I think, for the devastation,” she said.

At least 183 people have died in Germany and Belgium, including 12 disabled residents of a care home. Hundreds more are unaccounted for, though they may simply be unreachable amid the chaos and lost communications.

Germany ordered new evacuations on Saturday, and heavy rains in the southern region of Bavaria caused still more flooding yesterday. German meteorologists called the flooding the worst in 500 years, if not a millennium. The disaster has thrust the issue of climate change to the center of pivotal elections this fall.

First person: “The flash floods brought so much in their wake — cars and containers and ripped-out trees — that it was impossible to even launch rescue boats,” one witness said. “I have never seen such a speeding, rushing river.”

Destruction: Videos, photos and a map show the scale of the damage.

The devastating effects of climate change

Floods in Europe are just one sign of a global warming crisis, driving home the reality that the world’s richest nations are unprepared for its consequences. But whether mounting disasters in the developed world, including wildfires in Canada and scorching weather in California’s wine country, will affect climate change policy remains to be seen.

The extreme weather disasters come a few months ahead of U.N.-led climate negotiations in Glasgow in November, effectively a moment of reckoning for whether the nations of the world will be able to agree on ways to rein in emissions enough to avert the worst effects of climate change.

The European Commission last week introduced an ambitious road map for change, including a tax on imports from countries with less stringent climate policies. But the proposals are widely expected to meet vigorous objections from both within and outside Europe.

Quotable: “While not all are affected equally, this tragic event is a reminder that, in the climate emergency, no one is safe, whether they live on a small island nation like mine or a developed Western European state,” Mohamed Nasheed, the former president of the Maldives, said of the flooding.

Scenes in Siberia: Residents of northeastern Siberia are reeling from the worst wildfires they can remember. Thick smoke hung over Yakutsk, the coldest city in the world. Outside the city, villagers shoveled trenches to keep the fires away from their homes and fields.

In Lebanon, people can’t get their money from banks, the currency has crashed and the central bank chief is facing allegations of fraud.

The bus explosion in Pakistan that killed 13 people — including nine Chinese workers — was a terrorist attack, officials say.

Israel secretly authorized cybersurveillance firms to work for Saudi Arabia, even after the killing of the journalist Jamal Khashoggi.

“Titane,” a wild French film about a serial killer, won the top prize at the Cannes Film Festival.

Brexit has made it a lot harder for British bands to tour Europe, requiring them to navigate complicated new rules around trucking and exporting merchandise like T-shirts.

Four months after the megaship Ever Given got stuck in the Suez Canal, neither the canal nor the shipping industry has addressed some of the most critical issues that led to the grounding. Our investigation looks into what went wrong.

The Louvre’s art sleuth is on the hunt

Emmanuelle Polack is a 56-year-old art historian and archival sleuth who seeks to uncover the troubled histories of some of the Louvre’s treasured works — and to help them find their way back to their rightful owners.

France has faced criticism that it lags behind countries like Germany and the U.S. in identifying and returning artworks looted during World War II. The Louvre has recently sought to turn its image around, with more thorough investigations into the provenance of its works.

The museum holds more than 1,700 stolen artworks that were returned to France after World War II for which no rightful owners have so far come forward.

For Polack, the key to uncovering the secret histories of artworks that suspiciously changed hands during the Nazi occupation is to follow the money. She combs through the Louvre’s voluminous files to track how works of art were bought and sold over the years. The reverse sides of paintings often give clues about sales, restorations and framers that might lead back to their owners.

“For years I cultivated a secret garden about the art market during the occupation,” she said. “And finally, it is recognized as a crucial field for investigation.”

This icebox cake puts a twist on banana pudding by using chocolate wafers instead of the classic vanilla.

“Naomi Osaka,” a new three-part mini-series on Netflix, deftly explores the tennis star’s psychology instead of focusing on her technical prowess.

In “The Cult of We,” Eliot Brown and Maureen Farrell examine how Adam Neumann, a co-founder of WeWork, built a billion-dollar company simply out of renting communal work space.

Here’s today’s Mini Crossword, and a clue: Apple on a desk (three letters).

And here is today’s Spelling Bee.

That’s it for today’s briefing. Have a great week. — Natasha

P.S. The new season of “Modern Love” is coming to Prime Video on Aug. 13. Watch the trailer.

The latest episode of “The Daily” is on the maltreatment of Indigenous children in Canada.

You can reach Natasha and the team at [email protected].