A deadly plane crash in the Philippines.

Good morning. We’re covering a fatal plane crash in the Philippines, the U.S. withdrawal from Afghanistan and a fight against the Delta variant in Australia. 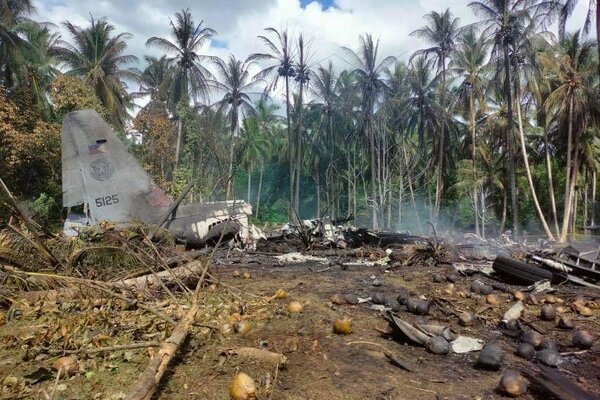 A military plane in the Philippines crashed on Sunday, with 96 soldiers and crew on board.

The plane missed a runway while trying to land on the island of Jolo. At least 45 people died, including three civilians on the ground. Officials fear the death toll will continue to climb.

The soldiers were heading to Jolo to bolster the military’s operations against Abu Sayyaf, a small Islamist group that the Philippine government considers a terrorist organization.

Context: The Philippine military has been trying to modernize its aging fleet. The plane that crashed first flew in 1988, and it was used by the United States Air Force until the Philippines bought it in January. Three helicopters have also crashed this year.

American troops and their Western allies have left the base at the center of the sprawling war in Afghanistan, effectively ending major U.S. military operations there after nearly two decades.

A contingent of 650 troops will remain to protect the American Embassy in Kabul. The top U.S. commander, Gen. Austin Miller, will remain for “at least a couple more weeks,” a Pentagon spokesman said, as President Biden signals to Afghans that the U.S. is not abandoning them.

The withdrawal on Thursday happened with little fanfare and no public ceremony, and in an atmosphere of grave concern over the Afghan security forces’ ability to hold off Taliban advances across the country.

Some U.S. intelligence estimates predict that the Afghan government could soon fall to the Taliban, who are inching closer to Kabul after having taken about a quarter of the country’s districts in the past two months. President Ashraf Ghani and his aides have become increasingly insular, and the city is vibrating with unease and trepidation.

Quotable: “There’s no hope for the future,” said Zubair Ahmad, 23, who runs a grocery store in Kabul. “Afghans are leaving the country. I don’t know whether I am going to be safe 10 minutes from now.”