June is peak season for Supreme Court decisions. It is the final month of the court’s annual term, and the justices tend to save their biggest decisions for the term’s end.

To prepare you for the next few weeks of news, I asked for help from my colleague Adam Liptak, who covers the Supreme Court. Adam has a fascinating background: He first worked for The Times out of college as a newsroom clerk. After going to law school, he returned as an in-house lawyer representing the newspaper. In 2002, Times editors recruited him to come back to the newsroom as a reporter covering legal affairs.

With Adam’s guidance, I’ve put together this guide, which starts with three thematic questions about the term, followed by a more detailed look at the four biggest expected rulings.

What will we learn about Amy Coney Barrett, the newest justice? She is clearly conservative. It is less clear whether she will be almost uniformly so — as, say, Samuel Alito is — or whether she will look for opportunities to compromise and burnish the court’s preferred image as a nonpartisan institution. The latter approach is the one that Chief Justice John Roberts sometimes chooses.

What about Brett Kavanaugh, the second-newest justice? In his first three years on the court, he has shown some signs of being in the Roberts camp, Adam notes. The approach that Kavanaugh and Barrett take is crucial because the three liberal justices now need at least two of the six conservatives to form a majority. Before the death of Ruth Bader Ginsburg, the liberals needed only one conservative.

Will there be any big surprises this month — or is this the quiet before the storm? As you’ll see below, most court watchers think there is one likely outcome for each of the major cases. But next year’s term, which will start in the fall, may be less predictable, with cases on abortion, guns and perhaps affirmative action. Adam says that 2021-22 could end up being the most significant term so far for the Roberts court.

The 2010 health care law — also known as Obamacare — is before the court yet again, in a case known as California v. Texas. As in the earlier cases, conservative lawyers and state officials are asking the justices to invalidate the law.

The details get technical, but the bottom line is that the justices appear likely to uphold the law, based on their questions during oral arguments in November.

(Those technical details: In 2012, the court upheld the law’s health-insurance mandate on the grounds that it was a tax and that Congress clearly has the authority to levy taxes. Since then, Congress and President Donald Trump reduced the amount of the tax to zero. As a result, the conservative lawyers argue that the mandate is no longer a tax and no longer constitutional — and that the entire law should be thrown out.)

“If they strike down the law, that would be huge,” Adam says, “but nobody seems to think they’re going to.”

The repeated Obamacare rulings do help polish the court’s image: A Republican-dominated court gets multiple chances to uphold the same Democratic accomplishment. 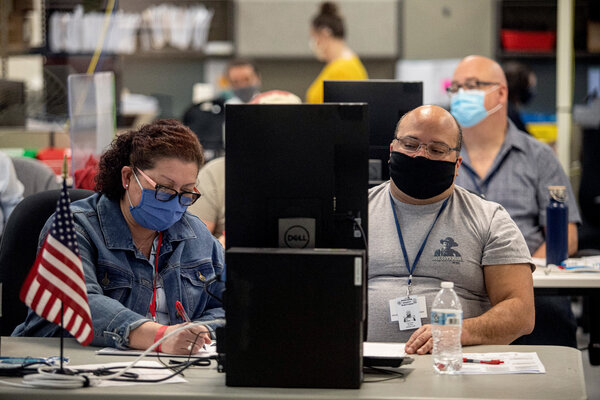 The narrow outcome seems all but certain: The court’s conservative majority will uphold two Arizona measures. One requires election officials to discard ballots cast at the wrong precinct; the other makes “ballot harvesting” — the collection of ballots for delivery to polling places — a crime in most circumstances.

The larger question is whether the ruling will be so broad that it will also effectively endorse new voting laws that states have passed this year. Since Trump lost re-election last year and falsely blamed fraud for his defeat, several states have passed laws in the name of enhancing election security. Those laws are a mixture of common-sense provisions (or at least debatably so) and partisan provisions intended to make voting more difficult, especially in heavily Democratic areas.

The Roberts court has generally sided with Republican state officials when they have restricted voting access.

Case No. 3: Religion vs. gay rights

Like many cities, Philadelphia uses private contractors to screen potential foster parents. One of those contractors, a Catholic social services agency, has asked for the right not to place children with same-sex couples. Philadelphia has said that all contractors must follow the city’s anti-discrimination policies.

The crucial question in the case, Fulton v. City of Philadelphia, is whether same-sex couples deserve the same protection against discrimination as racial minorities — or whether religious groups can define marriage as being only between a woman and a man.

The justices’ questions during oral arguments seemed to point to a ruling in favor of the Catholic agency, Adam says. That would restrict the impact of the 2015 ruling establishing a right to same-sex marriage, making clear that L.G.B.T.Q. Americans could not expect the same protections as other groups. It would also raise questions about whether the newly conservative court might one day revisit that 2015 ruling.

After Brandi Levy, a 14-year-old in central Pennsylvania, failed to make the varsity cheerleading team at her public high school, she posted an angry, vulgar message on Snapchat. The school responded by suspending her from the junior varsity team for a year. The case, Mahanoy Area School District v. B.L., raises the issue of how much schools can regulate online behavior.

During oral arguments, the justices seemed skeptical of the punishment’s severity. But Adam is not sure they will use this case to issue a sweeping ruling about student speech and social media. They could also issue a narrow ruling — and one that may not follow ideological lines — that returns the case to a lower court and leaves the grander questions for another day.

For more: A recent episode of “The Daily” goes into more detail on the Levy case. And these charts, by Adam and Alicia Parlapiano, show public opinion on the four big cases, as well as a few others — on labor unions, college athletics and political donations — set to be decided this month.

As the U.S. starts to look past the pandemic, many families are dealing with a lonely kind of grief.

Dogs are being trained to detect the coronavirus. “The smell is obvious, just like grilled meat for us,” one researcher said.

Covid shots are free. Some unvaccinated adults don’t believe that.

Texas Democrats walked out of the State Legislature to block a bill restricting voter access. Republicans vowed to revive it.

Documents obtained by The Times show how President Biden aims to expand the legal immigration system, reversing many of Trump’s changes.

Today’s special election to fill a congressional seat in New Mexico is a test of the Republican Party’s focus on crime.

Citing her mental health, Naomi Osaka dropped out of the French Open after she was fined for skipping a news conference. It was “not the outcome anyone in tennis desired,” The Times’s Christopher Clarey writes.

China will let families have three children, rather than two, to try to reverse a declining birthrate.

In an interview with Ezra Klein, Barack Obama discusses his political mistakes, his favorite books and his navigation of racial issues.

No filter: Kate Winslet is back on the sides of buses — without airbrushing.

Meth, money and accountability: How a police chief in Wyoming lost her war on drugs.

Pose: Meet the drag ball dancers (and protesters) of Bogotá.

A Times classic: How every House member got to Congress (from 2019).

Lives Lived: Faye Schulman was a Jewish partisan photographer and fought the Nazis on the Eastern Front. “I want people to know that there was resistance,” she once said. She died at about 101.

The show goes on at the Globe

The Globe theater of Shakespeare’s day survived multiple outbreaks of the plague. So when the pandemic shuttered live performances in London last March, many expected the modern recreation of the Globe to make it through. It hasn’t been easy.

The theater, which relies heavily on tourism, let go of 180 freelance actors and crew and furloughed most permanent staff members. Even with those cuts, executives said, the Globe might have shut down if not for the British government’s arts bailout.

The Globe reopened last month at a quarter of its usual capacity. To cut down on costs, it’s staging a revival of a 2019 production of “A Midsummer Night’s Dream.” Actors must maintain social distancing onstage, and plays are running without an intermission to reduce virus risk.

The Times culture reporter Alex Marshall recently headed to the Globe for its first performance in over a year. The mood outside, he reported, was ecstatic. “It’s just great we’re back and people are hungry for it,” Sean Holmes, the play’s director, said. “We can’t sustain at this level of audience by any means, but I’m feeling optimistic.” — Sanam Yar, a Morning writer

A pool can be soothing before you wade into its waters. Take a look at these aerial photos.

There is so much you don’t know about being a fly.

The pangrams from yesterday’s Spelling Bee were delight, delighted, highlighted and lighted. (Friday’s were headphone and openhanded.) Here is today’s puzzle — or you can play online.

P.S. Some cities started celebrating Memorial Day in the 19th century — “not by any enactment of Congress,” The Times wrote in 1870, “but by the general consent of the people.”

Today’s episode of “The Daily” is about the Tulsa Race Massacre. On the Book Review podcast, Jean Hanff Korelitz talks about her new novel. On “Popcast,” the triumph of J. Cole.