The apparent problem with Johnson & Johnson’s Covid-19 vaccine is both serious and rare, which makes it a thorny issue for policymakers to address and for the rest of us to think through.

Six U.S. women between 18 and 48 developed blood clots within two weeks of receiving vaccine shots. One of the six died, and another is in critical condition. Some Europeans have developed similar complications after receiving the AstraZeneca vaccine, raising the possibility that the problem is broader than Johnson & Johnson’s version. (It does not appear to affect the Moderna or Pfizer vaccines, which use a different technology.)

Federal regulators responded very aggressively, calling for a national pause in the use of the Johnson & Johnson vaccine. That approach has the advantage of focusing the country on the problem, so that doctors and patients can be on the lookout for the symptoms of the clots, which are highly unusual and require different treatment from most clots. A pause also prevents more people from suffering any side effects.

Some experts praised the move. “Any time there is a possible serious side effect,” Dr. Tom Frieden, a former head of the Centers for Disease Control and Prevention, wrote, “it’s time to stop, listen, learn and plan.” Natalie Dean, a biostatistician at the University of Florida, argued that federal officials had to respond aggressively, to protect the long-term credibility of vaccines. Dr. Megan Ranney of Brown University wrote, “I’m glad that we do good science and post-vaccine monitoring.”

But other experts believe the national pause may do more harm than good. Even if the vaccine did cause the clots, it did so in a tiny fraction of cases. Almost seven million Americans have received the Johnson & Johnson vaccine, including more than one million women between 18 and 48.

One way to think about those numbers: While the chances of a fatal blood clot from the vaccine may be something like one in a million, roughly 125 out of every one million Americans between 18 and 48 have died of Covid since early last year.

For that reason, health experts emphasized that the benefits of the Covid vaccines far outweigh the risks for most people, as this Times Q. and A. explains. Dr. Angela Rasmussen, a Georgetown University virologist, wrote that she had received the vaccine last week and that “I’m not losing sleep over this.” Dr. Scott Gottlieb, a former head of the Food and Drug Administration, said on CNBC, “For most consumers, I wouldn’t be concerned about this.”

Realistically, though, many Americans will be concerned, and the damage to Johnson & Johnson’s credibility may be lasting. Vaccine skepticism was already a problem, and many unvaccinated people may now be deeply hesitant to receive the Johnson & Johnson shot — and perhaps any vaccine. “There’s nothing we can do to restore confidence,” one Republican state official told CBS News.

The Biden administration and state governments will almost certainly try to restore confidence if they conclude that the side effects are in fact rare and manageable, because Johnson & Johnson is a key part of the country’s vaccination plan.

So far, its shots have accounted for only about 9 percent of fully vaccinated Americans, according to the C.D.C. But that was about to change. Over the next few months, Johnson & Johnson was scheduled to account for more than one-third of vaccinations. Without it, the country would still have enough shots to inoculate all adults by midsummer, although more slowly.

Regulators did have options other than a full pause, some experts argued. “People should be given the info & allowed to choose,” Govind Persad of the University of Denver wrote on Twitter. “Deaths from Covid b/c you weren’t vaccinated are permanent.”

“There’s no actual evidence the F.D.A. knows how to manage public psychology correctly on this,” my colleague Ezra Klein wrote.

Ezra also argues that the pause strengthens the case for prioritizing first shots of Moderna and Pfizer over second shots (which was the subject of yesterday’s newsletter).

Potential signs of a blood clot from the vaccine include severe headaches, abdominal pain, leg pain or shortness of breath up to three weeks after receiving a dose.

Dr. Anthony Fauci said the pause was likely to last “days to weeks, rather than weeks to months.”

The news creates another problem for Europe’s hobbled vaccination campaign. 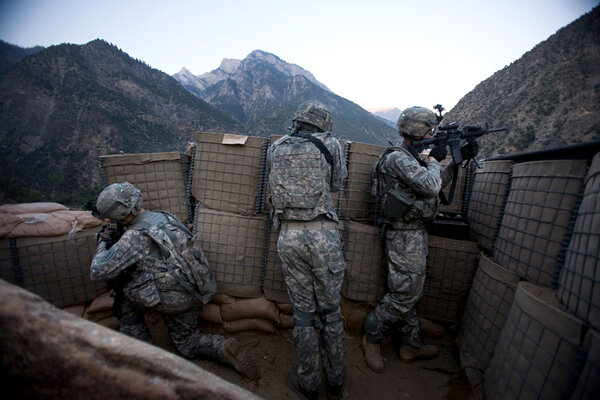 Officials predicted that the withdrawal would not create new threats against the U.S. but could allow the Taliban to make gains.

Kim Potter, the officer who shot Daunte Wright in Brooklyn Center, Minn., has resigned, as has the city’s police chief.

Wright, 20, was a father and a basketball fan. Read more about him.

In the Derek Chauvin trial, the defense called its first witnesses, including a friend of George Floyd’s. Here are key moments from Day 12.

Fifteen years ago, the Buffalo Police Department fired a Black officer for stopping a colleague’s chokehold. Yesterday, a judge said her firing was wrong.

Despite warnings of possible violence from a pro-Trump mob on Jan. 6, Capitol Police leaders told officers to refrain from using their most aggressive tactics, an investigation found.

Officer William Evans, who died after a car rammed into him outside the Capitol this month, lay in honor in the Rotunda.

Joel Greenberg, a former Florida official indicted in the inquiry that also focuses on Representative Matt Gaetz, has been cooperating with federal investigators.

Hundreds of companies, including Google and Starbucks, say they oppose “any discriminatory legislation” that would make it harder for people to vote.

After a teenager was sexually assaulted in Venezuela, the police arrested her mother and a former teacher for helping her end her pregnancy. The case has set off a national debate over abortion.

Several people are missing after a commercial boat capsized off the Louisiana coast.

The authorities in California arrested two men in connection with the 1996 disappearance of Kristin Smart, a college student.

She was supposed to get a deposit of around $80. A bank glitch gave her $1.2 million.

“A battle between you and you”: The Times’s Shawn McCreesh on opioid addiction in his Pennsylvania hometown.

Hare Loss: Darius, the world’s longest rabbit, has gone missing in England. (If you haven’t seen the photo, it’s worth a glance.)

Lives Lived: The ballerina Mary Ellen Moylan was an early George Balanchine protégée and earned raves from critics. Yet she left the world of dance when she bought a hamburger stand with her first husband. She died at 95.

The superstar Elton John and the rising singer Rina Sawayama. The playwright Jeremy O. Harris and his drama school classmates. The artist Ai Weiwei and his cats.

T Magazine’s annual Culture issue is dedicated to friendship in all its forms, “how sustaining it is and how elastic it can be,” as Hanya Yanagihara, the editor in chief, writes. “There are no rules about what a friendship can be: It needs only effort, and mutual commitment.”

There is art and photography and essays on life-defining relationships; the kinds that drift apart and the ones that always pick up right where they left off. See the issue here.

For the 15th anniversary of The Times’s Book Review podcast, Pamela Paul, the host, put together a list of her 15 favorite episodes.

Frank Gehry recently turned 92. But he has no plans to retire. “What would I do?” he told The Times. “I enjoy this stuff.”

The hosts poked fun at the Johnson & Johnson pause.

The pangram from yesterday’s Spelling Bee was chewable. Here is today’s puzzle — or you can play online.

P.S. The word “hotelification” — about the rise of cafes, rooftop gardens and other office amenities — appeared for the first time in The Times yesterday.

Today’s episode of “The Daily” is about the Supreme Court. On “The Argument,” Ross Douthat and Michelle Goldberg debate the future of abortion rights.