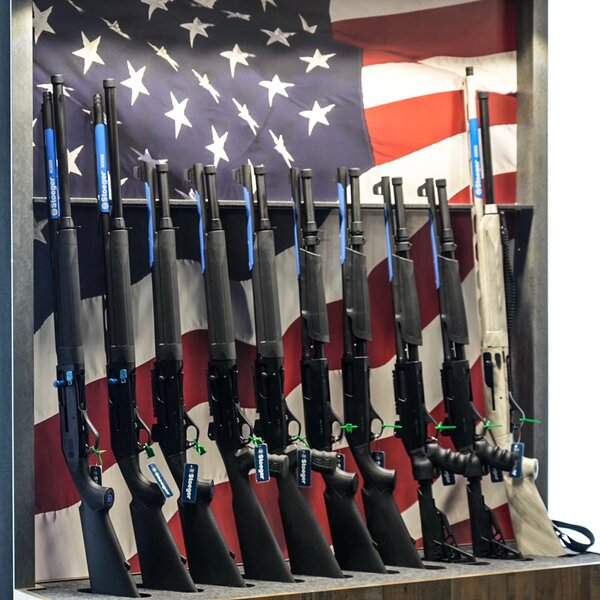 Two years ago, in Atlanta, 22-year-old Rico Marley was arrested in a Publix supermarket. He was wearing body armor and carrying six loaded weapons, including a semiautomatic rifle and a 12-gauge shotgun. Prosecutors, as my newsroom colleague Richard Fausset reports in a recent story, charged Marley with 11 felonies, including “six counts of possession of a weapon ‘during commission of or attempt to commit certain felonies.’ ”

The charges didn’t stick. They were dropped the next year, although Marley was soon booked again in a separate incident, in May 2022, on lesser counts of reckless conduct. The reason Marley was released from jail initially, though, was that he hadn’t actually committed a felony. And in fact, as of 2022, under a law signed by Gov. Brian Kemp, any Georgian eligible or licensed to carry a weapon and not otherwise prohibited from owning one is permitted to carry both handguns and long guns either concealed or in the open.

As Fausset notes in his piece, this whole episode speaks to “a uniquely American quandary: In states with permissive gun laws, the police and prosecutors have limited tools at their disposal when a heavily armed individual’s mere presence in a public space sows fear or even panic.”

To this I want to add a related point and make an argument: Permissive gun laws and ubiquitous open carry are more than a challenge to law enforcement; they’re a challenge to the very possibility of an open, democratic society.

There is a saying, borrowed from the science fiction writer Robert A. Heinlein and popular among supporters of an unlimited right to own and carry firearms, that an “armed society is a polite society.” The proliferation of weapons, in other words, brings social peace. Or, if not peace, then a certain amount of deference and respect between individuals who know that either one could use lethal force against the other.

Let’s say, for the sake of argument, that this belief is right. That firearms work to tame rather than inflame the passions. That, the evidence of our eyes and ears notwithstanding, guns do more to resolve disputes than escalate them.

But even if that were true, which it manifestly isn’t, peace is not the absence of conflict. And social peace in a democratic society cannot simply be a perpetual standoff among armed individuals. The reason is that democracy rests on a measure of trust and respect among citizens, what the philosopher Danielle Allen calls “political friendship.”

“Political friendship,” Allen writes in “Talking to Strangers: Anxieties of Citizenship Since Brown v. Board of Education,” “is not mainly (or not only) a sentiment of fellow feeling for other citizens.” It is, instead, a way of “acting in respect to them.”

“A polity will never reach a point where all its citizens have intimate friendships with each other, nor would we want it to,” she continues. “The best one can hope for, and all one should desire, is that political friendship can help citizens to resist the disintegration of trust and achieve a community where trust is a renewable resource.”

We don’t have to like each other to govern together, but we should try to see and speak to each other as equals, so that we can debate, deliberate and disagree as members of a shared political community.

Guns, when carried as totems through public space, make this impossible. Whether they are carted to a restaurant or a grocery store, a park or a library, they send a clear message: that a disagreement might turn deadly, and that I, the gun wielder, do not respect you enough to refrain from the threat of lethal violence. This is especially true when guns are used to confront and intimidate protesters, as happened again and again during the racial justice protests and demonstrations of 2020 and 2021, according to Everytown, a gun safety organization.

The mere fact of armed counter-demonstrators brandishing guns at people they oppose is why legal scholars like Timothy Zick of the William & Mary Law School have warned that in our age of extremely permissive gun laws, the Second Amendment to the Constitution threatens to overwhelm and overtake the First. “The visible presence of firearms increases the risk of violence and death when exercising one’s First Amendment rights,” Zick and Diana Palmer, a part-time lecturer at Northeastern University, write in The Atlantic. “The increased risk of violence from open carry is enough to have a meaningful ‘chilling effect’ on citizens’ willingness to participate in political protests.”

A chilling effect on citizens’ willingness to participate in political protests is also a chilling effect on citizens’ ability to trust each other. And in the absence of trust, democracy is a hard game to play. When distrust “pervades democratic relations,” Allen writes, “it paralyzes democracy; it means that citizens no longer think it sensible, or feel secure enough, to place their fates in the hands of democratic strangers. Citizens’ distrust not of government but of each other leads the way to democratic disintegration.”

If, as Allen argues, “Democratic trust depends on public displays of an egalitarian, well-intentioned spirit,” then we are at a severe disadvantage, living as we do in a country where public space for so many people is saturated with guns, tools for — and symbols of — violence and domination.

Late last year, in Decatur, Ga., a man took his car to an auto repair shop. One of its employees, a mechanic, stepped into the car to test it. The man started shooting. He believed, mistakenly, that the mechanic was trying to steal his car; the mechanic was killed. A week later, in Washington D.C., a 13-year-old boy was shot and killed by a man who believed he was tampering with cars on the street. And a few days after that, in Newport News, Va., a 6-year-old brought a gun to his elementary school, where he shot and injured his teacher.

The Times is committed to publishing a diversity of letters to the editor. We’d like to hear what you think about this or any of our articles. Here are some tips. And here's our email: [email protected].