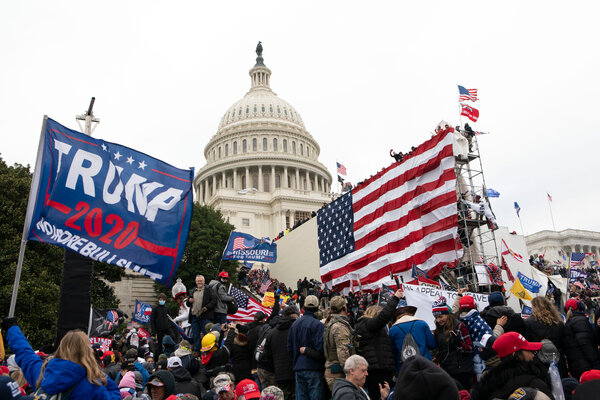 I have been stopped at Grand Central Terminal and had my bag searched, just for commuting with brown skin. I have had to wait at Kennedy Airport to have my Muslim identity verified. So no, I cannot stop thinking about what white supremacist insurgents got away with on Jan. 6.

And yet, my experiences are a fraction of the systemic terrors my Black and Latinx neighbors are subjected to. Americans are systematically criminalized for nothing more than their poverty and the color of their skin. It is heartbreaking to see what it takes to prompt action.

Many of us — who have watched our families be called rapists, who have had immigration bans on our nationalities and who have seen caricatures of our cultures wielded as petty insults — are wondering what has taken so long. The desecration of our democracy is appalling, but it did not begin on Jan. 6.

“A Veteran Daredevil Has Freeskiing Abuzz. He’s 14” (Sports, Jan. 3) understates the risks involved in extreme skiing. For every Kai Jones, there’s a Shane McConkey, the freestyle skier who died at 39 trying a stunt in a film.

For every young person who makes it big and nails the jump, there are a hundred who don’t, often with life-altering consequences. It’s explained away as a freak accident (news flash: it isn’t), and the parents who thought that it could never happen have had their fantasy bubble pierced.

When they get hurt or killed, film producers and sponsors shed crocodile tears, but they don’t seem to care. There will always be someone else coming off the assembly line to star in their movies or hawk their products.