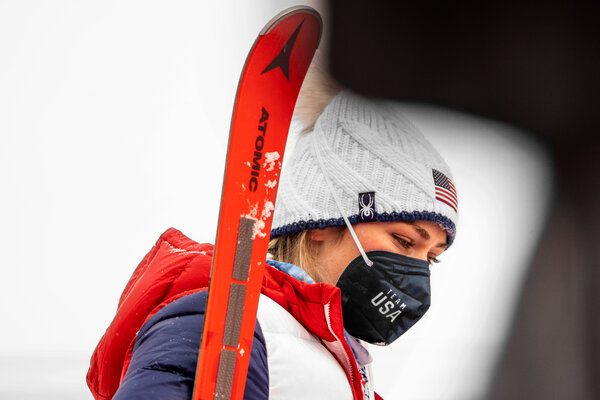 Ms. Beilock, a cognitive scientist and the author of “Choke: What the Secrets of the Brain Reveal about Getting it Right When You Have To,” is president of Barnard College.

Watching a two-time Olympian and three-time Olympic medalist skier stumble — not once, not twice, but three times — at the Beijing Olympics was both extraordinary and painfully ordinary. No matter how well we prepare ourselves, how focused we are, what mental exercises we do to get ready, the reality is: These things happen.

Mikaela Shiffrin herself seemed baffled as she talked to reporters after tripping on a gate and failing to finish the women’s Alpine combined race on Thursday, her third disastrous mishap at the Games.

“I didn’t feel pressure there,” she told them. “I mean, there’s always pressure, but I didn’t feel — I just felt loose and relaxed, like I knew my plan: focused, good skiing, and I was doing it.”

“And it still didn’t work.”

The experience of choking in high-pressure situations can often feel like an out-of-body experience. That’s because in some ways, it is. My research on this topic has found that well-practiced athletic performances, such as those we see in Olympic competitions, rely almost entirely on physical memory and repetition, rather than conscious thinking. When they’re in the zone, the best athletes in the world have trained themselves to take consciousness out of the picture — but when that wall of consciousness is breached, it all collapses.

It’s impossible to know exactly what led to Shiffrin’s stumbles, but the crushing pressure we put on our heroes becomes more apparent with each Olympic season. That’s why some athletes are responding by opting out, or making choices that prioritize their mental and physical health.

The phenomenon is mirrored by the pressure all of us put on ourselves. Humans are biologically hard-wired to crave a sense of control and certainty over what will happen in the future. But with that comes a tendency to overfixate on the details of our performance, which can get in the way of achieving our best.

Instead of focusing on what we hope to achieve — at tomorrow’s board meeting, at that cocktail party we’re braving solo, at a major exam — our brain is preoccupied by running through scenarios to avoid. Unfortunately, this does nothing to help prepare us, and only invites an overattention to details best left outside conscious awareness — noise.