Once again, the president is using aid to extort re-election help. 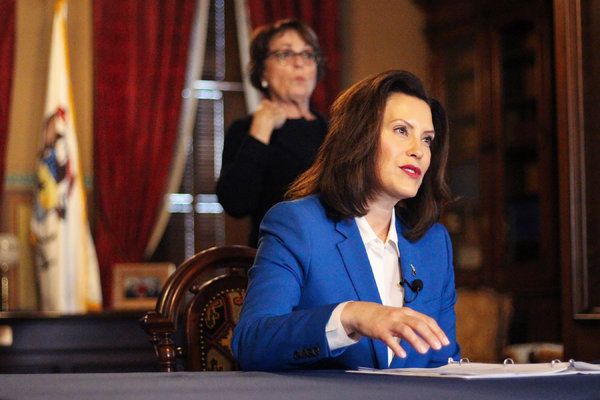 Members of Congress, she said, should imagine living in a state “prone to devastating hurricanes and flooding.” What would they think, she asked, if their governor requested a meeting with the president to talk about disaster assistance, and he replied, “I would like you to do us a favor”?

Karlan seemed to assume that the grotesquerie of this hypothetical would be obvious. Now, with American life upended by coronavirus, her flagrantly corrupt scenario has come close to reality.

True, Trump is not demanding that governors investigate Joe Biden in exchange for federal help. But he’s strongly suggested that if governors speak candidly about his monumental incompetence, he’ll penalize them and their states as they struggle to contain the coronavirus. Once again, he’s using his control of vital aid to extort assistance with his re-election.

“There are a lot of parallels between the president’s behavior now and during the whole Ukraine scandal,” Representative Adam Schiff, the California Democrat who led Trump’s impeachment prosecution, told me. “Certainly the most apparent is his demand that the governors basically pay fealty to him, praise him, or they’ll suffer consequences.”

At a news conference last week, Trump said that he had instructed Vice President Mike Pence, whom he has placed in charge of the coronavirus response, not to call the governors of some blue states where the pandemic is raging. “I say: ‘Mike, don’t call the governor of Washington. You’re wasting your time with him. Don’t call the woman in Michigan,’” he said, adding, “If they don’t treat you right, I don’t call.”

“The woman in Michigan,” of course, is Gov. Gretchen Whitmer, whose state has one of the nation’s most brutal coronavirus outbreaks. Trump’s contempt for Whitmer isn’t surprising, given his well-documented disdain for female leaders. As he weighed a federal disaster declaration for Michigan, he told Sean Hannity, “We’ve had a big problem with the young, a woman governor from — you know who I’m talking about — from Michigan. We can’t — we don’t like to see the complaints.”

Despite Trump’s threats, we don’t yet know if political favoritism is affecting the distribution of lifesaving supplies. Trump ended up approving Michigan’s request for a disaster declaration, unlocking extra help from the Federal Emergency Management Agency. The Washington Post reported that Florida, governed by the Republican Trump sycophant Ron DeSantis, has had its requests for equipment from America’s emergency stockpile entirely fulfilled, while other states are receiving only a fraction of what they ask for. But federal officials insist that aid is being given out based on relative need, and there’s no evidence otherwise.

Nevertheless, there’s little doubt governors feel life-or-death pressure to flatter the president. “Several governors made clear they fear inadvertently harming their own citizens if they are too strident in demands for desperately needed medical supplies, or if they clash too publicly with Trump over pandemic policy as the contagion spreads,” reported The Los Angeles Times. A New York official told The Post that Gov. Andrew Cuomo and others in the state are “working under the assumption they will not get much help from the federal government, but that criticizing Trump could jeopardize any help they could receive.”

Trump isn’t just trying to feed his ego by coercing blue state governors into pretending that he’s doing a good job. He’s getting help with the November election. His campaign just rolled out a new ad, titled “Hope,” featuring appreciative quotes from Cuomo and Gov. Gavin Newsom of California. With the lives of their constituents at stake, they’ve given him the made-for-TV sound bites he was never able to extract from Ukraine’s president, Volodymyr Zelensky.

For the many New Yorkers who loathe this president, it’s hard to imagine a more profound insult. Due in part to Trump’s failures, the United States has the world’s worst coronavirus outbreak, and New York State is its biggest hot spot, with over 1,200 deaths as of Monday afternoon. There are ventilator shortages and makeshift morgues.

A little more than three years ago, Democrats gathered in Javits Center in Manhattan thinking they were going to celebrate Hillary Clinton’s election. Now it’s a temporary hospital. And in order to secure lifesaving assistance, our leaders have to grovel to the man who has helped create our tragedy.

Besides Ukraine, there is another precedent for Trump’s behavior: Puerto Rico. After Hurricane Maria, Trump grew incensed when the female mayor of San Juan called out the administration’s inadequate response, and he’s been punishing the island ever since, slowing the release of aid and slashing its Medicaid funding. No doubt, Trump’s racism and Puerto Rico’s lack of national political representation exacerbated his mistreatment of that beleaguered territory. But it was a preview of how he’d use his power.

“I don’t think anyone was that surprised when he was as vindictive as he was after the trial in firing people and having them marched out of the White House, and I don’t think anybody can be all that surprised now,” Schiff said of Trump. “Dismayed, horrified, appalled, yes. Their worst fears realized once again, yes. Surprised, probably not.”

Republican senators knew who Trump was and they refused to remove him. Now we’re all, as the president said of the former ambassador Marie Yovanovitch, going to go through some things.