In July 2005, Specialist Christopher Velez’s Army infantry unit received an urgent call for backup from a village in Uruzgan Province in Afghanistan: A group of American soldiers had gotten into a firefight with Taliban fighters.

“One of our guys who got wounded, he didn’t come back out of that village, and someone had to go retrieve him,” Mr. Velez told me on a recent warm morning. “We weren’t sure if he was alive, so I raised my hand.”

During the rescue attempt, a grenade exploded a few feet from Mr. Velez, badly wounding him. While he managed to take down the enemy fighter who threw the explosive, he couldn’t make it to the captive soldier, who was a friend of his. Later, Mr. Velez discovered his friend had been killed. Mr. Velez earned a Purple Heart. 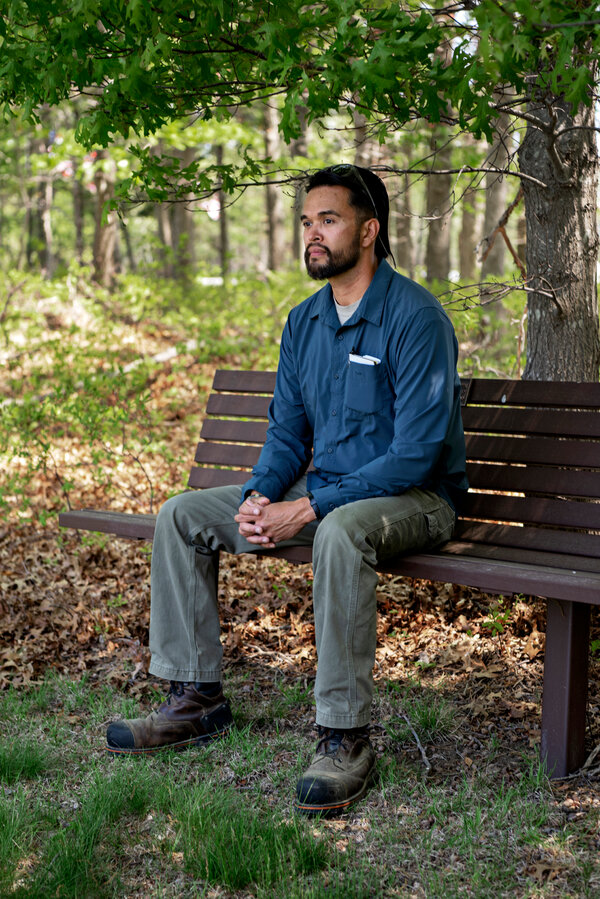 After Mr. Velez was discharged in 2006, he returned home to New York. He missed the military community and a life of service, and wore a steel wristband memorializing 12 fellow soldiers who died overseas, including the man he had sought to save.

About seven years ago, Mr. Velez landed a mundane but well-paying white-collar job. During the Covid-19 pandemic, he became disillusioned with his bosses, who allowed some employees to work from the safety of home while requiring others — including him — to go into the office. While Mr. Velez said he didn’t feel in danger, he recalled how military superiors “would never send you to do something they wouldn’t do.”

In late January, Mr. Velez, now 36, quit his job and turned to a new line of work: groundskeeper at Calverton National Cemetery. Founded in 1978, it stretches across more than 1,000 bucolic acres on eastern Long Island, providing the final federal benefit offered to veterans: burial.

The pay at Calverton varies based on experience and specialized expertise. But the starting salary is around $23 an hour, with all the standard benefits of public-sector work, including health insurance and a retirement plan. A city boy from Midwood in Brooklyn, Mr. Velez had no experience mowing lawns, laying sod or operating heavy machinery. But he felt a calling.

“I wanted to get back into the veteran community because I know those guys,” he said. “They lead from the front.”

Today, 75 percent of workers at the National Cemetery Administration have military experience. They help operate 155 national cemeteries, including Calverton, the largest. All told, Calverton holds the remains of 280,000 people; the national burial system has interred more than four million.

Veterans have long viewed burial as both a sacred right and a last act of fellowship. Some volunteer to show up at the funerals of complete strangers, including veterans who were homeless or had no next of kin.

While a national cemetery’s sea of headstones provides a silent toll, the veterans attending to them serve as living monuments to the long road back from service. Many struggle with serious ailments, including war trauma. While some may have had misgivings about their military orders, many welcome the cemetery’s holistic mission: to secure peace for families of the deceased.

In the Gettysburg Address, Abraham Lincoln put forth a vision for honoring the country’s war dead: “The world will little note, nor long remember what we say here,” he said. “But it can never forget what they did here.” Yet that vision was rarely realized.

During the Civil War, the Army’s Quartermaster Department oversaw military burials, which were often makeshift. Some soldiers were given wooden headboards and shallow graves near war hospitals, while others were left on the battlefields where they had fallen.

In 1867, Congress passed the National Cemetery Act, which appropriated $750,000 to purchase land, marble headstones and lodges for groundskeepers, most of them disabled veterans. Armed only with crude tools, they set headstones, buried the dead and erected monuments to unknown soldiers.

The government also sought to recover the remains of more than 300,000 soldiers. Typically, the gruesome work of exhumation was assigned to former slaves, Confederate veterans and Black Union soldiers.

More than 150 years later, the National Cemetery Administration employees carry on the simple but arduous work of laying veterans to rest.

For several months during the pandemic, Calverton’s daily interment rate more than doubled, according to a spokeswoman. (Calverton also had to suspend in-person funerals, though it offered families opportunities to hold services once restrictions lifted.) Employees worked six-day weeks, with shifts often running from sunrise to sundown.

On Memorial Day 2020, Calverton’s normally bustling grounds hosted only a small, simple ceremony. “It is said we die two deaths,” Randy Reeves, a veteran who was then the under secretary for memorial affairs at the Department of Veterans Affairs, said in remarks there that day. “We die the first time when breath leaves us. But we only truly die sometime in the future when no one speaks our name or tells our story.”

Outside certain communities, holidays like Memorial Day have lost their symbolic power. One 2019 poll found that only 55 percent of Americans could correctly describe the meaning behind Memorial Day. Now it is marked by hollow thanks, shopping sales, even militarism. Calverton, 70 miles east of New York City, is largely concealed from public view, hidden from the road by lines of trees.

As America’s civilian-military divide widens, many have lost a tangible connection to conflict, including a basic understanding of its casualties. War and its costs seem to have become a constant in the background of the nation’s history. Consequently, in 2010, the cemetery administration completed its greatest acreage expansion since the Civil War.

On a sunny day this month, the Calverton staff members prepared to welcome back families for what they hoped would be a more normal Memorial Day.

One of them was Lawrence Hawkins, a Marine Corps veteran who has been tending to the grounds for 16 years. He and his crew imbue the cemetery with a sense of both warmth and cold. While beneath the surface lurks death, the grounds and those who maintain them are brimming with life.

The crew members achieve this delicate balance by following a set of procedures that dictate everything from the space between headstones to the procedure for cutting down a tree. Workers plant special blends of grasses to ensure color and softness; marble headstones are scrubbed to achieve their brightest white. They also regularly clear away browning grass and rotting bouquets, allowing visitors to give their undivided attention to the graves.

Calverton employees view their military service with pride, though many understand war’s messy legacy. They give testament to its complexities in their cemetery work, but also through quiet signs of camaraderie.

“Everyone here is cut from the same cloth,” Mr. Velez explained. “We’ll catch each other drifting off, having that thousand-yard stare or whatever you want to call it. We can usually break it up with a silly joke or bring each other back to reality.”

But not always. This year, a former Army Ranger and Calverton employee took his own life. Many employees attended the funeral and buried him on the cemetery’s eastern tip.

“This headstone will always be taken care of by a veteran, or by somebody,” said Nicholas Clark, a Marine Corps combat veteran who works in Calverton’s headstone department. “No one is going to leave it behind, you know. Not like some of these old private cemeteries, where the stones are falling over or cracked.”

This burial network for veterans serves as vital infrastructure: for keeping the past alive, for supporting community and for mourning. Civilians may view these grounds from afar as static and stuck in the past. In truth, they are dynamic, didactic spaces that gracefully reckon with war. As Mr. Hawkins put it, “You’re building down instead of building up.”

Jasper Craven is an investigative reporter covering the military and veterans’ issues.