People here are stocking up on groceries and toilet paper — and guns and ammo and, soon, morel mushrooms.

Mr. Leonard is the author of “Deep Midwest: Midwestern Explorations.” 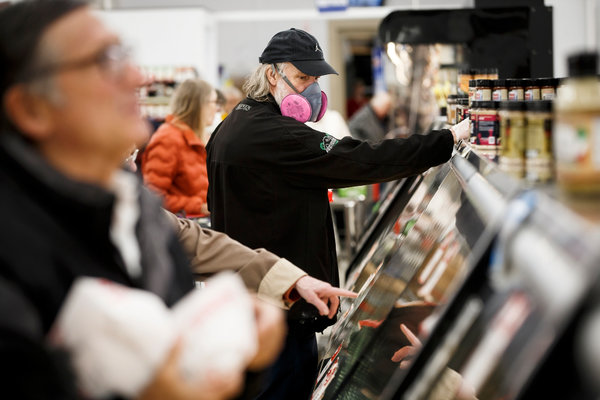 KNOXVILLE, Iowa — How are things in my state during the pandemic? In a nearby town, about 20 miles away, people are caught up in it like many Americans. There’s been a run on canned goods, frozen pizzas and, of course, toilet paper.

Some people drive store to store a couple of times a day, hoping to get lucky and arrive at the same time as a toilet paper shipment.

The grocery stores have restricted their earliest hour of shopping to retirees and other vulnerable people. Some elderly shoppers limp, others use walkers and wheelchairs while store workers help them.

As of Sunday, Iowa has reported over 325 coronavirus cases (and four deaths). There have been no reported cases here in Marion County. According to the most recent weekly numbers, about 41,000 Iowans filed for unemployment, compared with just over 2,400 the previous week.

Most of us here are on the edge of an economic precipice, one or two paychecks from humiliation and poverty. Sure, there are a few rich farmers, bankers and businessmen with shiny new R.V.s who winter in Florida or Arizona. But most of us could be in deep trouble. Some of us are older, chained to 30-year mortgages in homes that are falling apart and not worth much.

Still, I’m optimistic. In the worst-case scenario, our timber is full of game. Our rivers, streams and ponds are full of fish. Our pastures are filled with livestock. We can grow things. Our farmers, ranchers and the kids in 4H and FFA (youth mentoring and agriculture education organizations) know how to do it all.

In the context of distancing, people are becoming creative. Parents are taking their kids on “bear hunts,” inspired by the children’s picture book “We’re Going on a Bear Hunt,” where people put stuffed bears in windows, and people drive by, see them and wave. Last night, in Knoxville, population just over 7,000, hundreds of people climbed into their cars and trucks and “scooped the loop.” The local radio station took requests, and the whole town rocked, waving to one another, honking their horns as they distanced. From many of the cars, stuffed bears rode along.

There’s also been a run on guns and ammo. It’s not as if we don’t have enough already, but if things really go to hell, who knows? Might as well stock up — if you have the money.

Here, guns are tools. They take out varmints, and help feed us. For some reason, more guns and ammo make many of us feel safer. They also protect us — maybe from eventual toilet paper thieves. We stockpile, and it becomes a sign of strength, power and resourcefulness in our small towns, where we know so many people.

At gatherings before the pandemic, conversations among small groups of mostly men often turned to hunting and fishing. Guns are part of the fabric of life in our communities.

I recently bought a shotgun at Walmart, along with some rounds of birdshot and slugs.

The associate walked me out to my truck with my shotgun and ammo (he carried the ammo).

Our health care providers are in constant preparation. In our county, we are lucky to have two hospitals. In normal times, they are competitors. As rural hospitals, they operate on ever shrinking margins of profitability. But at a recent news conference, their C.E.O.s shared a table and their plans with the public. Beside them sat nurses who are infection specialists. They told the public they don’t fear the virus — they respect it.

One day last week, I stood in the parking lot of the Marion County Emergency Management office and watched an Iowa National Guard semi pull in and unload a pallet of personal protective equipment — the masks and gowns that help protect our emergency medical workers, nurses and doctors safe from infection. Public health workers distributed the gear to the emergency medical workers in our nine townships and to our hospitals.

Back at my house, in a rural area, it’s a different story from town. Walking south out my back door and through a field littered with the residue of last fall’s corn harvest I come upon brown stalks cut off at the knee, husks and chaff, with occasional bright yellow corn kernels peeking through like yellow stars in a universe of a faded brown, almost gray, backdrop.

Eventually I hit deep timber. Full of deer, turkeys, geese, ducks, raccoons, possums, rabbits, woodchucks, squirrels, squinnies and more, a land so full of game it doesn’t take much of a shot to hit something. In the woods, the ground is littered with last year’s hickory and walnuts, and branches knocked down by last winter’s storms. The shoots of spring wildflowers are starting to peek out from under the leaf litter.

We will soon collect morel mushrooms. Soak them overnight in saltwater to get the dirt and bugs out, and then sauté them in butter or olive oil. A pinch of salt. If you’re really in need of comfort food, bread them with flour or corn meal first, turn up the heat on the skillet and toss them in. They taste heavenly.

Before she died, my aunt Juanita told me and assorted kin at a reunion a story of the winter in what she called the Apple House during the Depression, when she was a little girl, and all they had to eat was apples, and the occasional game that could be shot or trapped. Grandpa Leonard was a hired hand on a farm. The Apple House was where the farmer dried and stored apples.

Hand on my arm, at a table, Aunt Juanita looked back those 80 years or so, and said: “When Dad or one of the boys got a squirrel, Mom always used to say: ‘Give me that squirrel head, honey. That’s all I want to eat, is the squirrel head. It’s the best piece of meat.’” She added, “It wasn’t until years later that we figured out there isn’t any meat on the squirrel head, and she treated it like it was a delicacy, just so us kids could get more to eat and we wouldn’t worry about her.”

In our pandemic, we are yet some distance from Apple House time, but it’s going to be strong institutions and smart public policy that will stop us from getting there. Grandpa Leonard was a Democrat. He went to his grave knowing that Franklin Roosevelt saved my grandma and their 11 children from starving to death during the Great Depression. It was a son of Iowa, the Republican Herbert Hoover, whose failed economic policies got us into that mess.

President Trump’s supporters are as strong and vocal as they ever have been. They’ve pivoted as crisply as a drill team from complaining that the virus is a Democratic hoax to bring the president down to barking that Nancy Pelosi and Chuck Schumer are undermining the president as he seeks to protect us from the scourge of a terrible disease. It may not be logically possible, but some hold both positions at the same time.

Mr. Trump, along with his enablers in his administration and many Republican members of Congress, have done their best to undermine those institutions that we need so badly now.

We are feeling the pain of that legacy, and unfortunately don’t have a Roosevelt in the White House. What we have is hope.

Robert Leonard, the news director for radio stations KNIA and KRLS, is the author of “Deep Midwest: Midwestern Explorations.”