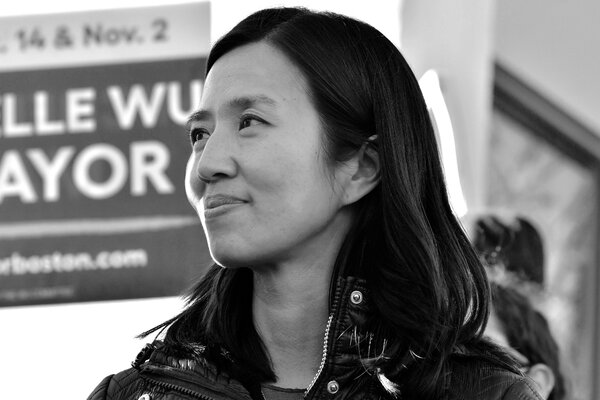 Ms. McNamara has written extensively about the history and politics of Boston.

BOSTON — Time to retire the tired old tropes about Brahmin swells, Irish ward heelers and the petty parochialism that for too long has defined this city on the national stage. A Taiwanese American woman from Chicago is about to become the mayor of Boston, a town that, until Tuesday, had elected only white men to that office.

Michelle Wu defeated Annissa Essaibi George, a City Council colleague whose father is from Tunisia and mother was born to Polish parents in a German refugee camp.

The election of Ms. Wu, a 36-year-old lawyer, represents a seismic shift to a political landscape in which “white” and “male” were prerequisites to be elected mayor since the position was established here in 1822. Ms. Wu will join at least 11 women (and possibly 13, depending on election results) as mayors of U.S. cities with a population of more than 400,000.

Ms. Wu and Ms. Essaibi George, both Democrats, emerged in September as the top vote-getters in the nonpartisan preliminary election that included not a single white man among the five candidates. By winning the runoff on Tuesday, Ms. Wu will succeed acting Mayor Kim Janey, who in March became the first Black Bostonian and first woman to occupy the position when Marty Walsh stepped down to join the Biden administration as secretary of labor.

It’s a long way from the Irish domination of the mayoralty that began in 1884 with the election of Hugh O’Brien, a native of County Cork. The office was held without interruption by men of Irish descent from 1930 to 1993, when Thomas Menino became the first Italian American to claim the job.