Even as the United States and China confront deep disagreements, there is a global challenge that simply won’t wait for the resolution of our differences: climate change.

While some have decided that we are entering a new Cold War with China, we can still cooperate on critical mutual interests. After all, even at the height of 20th-century tensions, the Americans and the Soviets negotiated arms control agreements, which were in the interests of both countries.

Climate change, like nuclear proliferation, is a challenge of our own making — and one to which we hold the solution. We have an opportunity this month to make clear that great power rivalries aside, geopolitics must end at the water’s edge — at the icy bottom of our planet in the Southern Ocean, which surrounds the entire continent of Antarctica.

The first post-World War II arms limitation agreement — the Antarctic Treaty signed in 1959 at the height of the Cold War — banned military activities, created a nuclear-free space, set aside territorial claims and declared the continent a global commons dedicated to peace and science. Now we have the opportunity to extend that global commons from the land to the sea.

China could make a powerful statement about climate leadership by throwing its weight behind the creation of three new marine parks — where no fishing or other industrial activity would be allowed — in the Southern Ocean waters off the East Antarctic, around the Antarctic Peninsula and in the Weddell Sea. Totaling nearly four million square kilometers of protected oceans, about one and a half million square miles, this would be a refuge where wildlife can adapt to warming and acidifying seas, and one of the largest acts of environmental protection in history.

Study after study shows that one of the best ways to protect and conserve marine biodiversity is by declaring protected areas in parts of the ocean — eliminating stresses like fishing and other industrial activity — which in turn helps ecosystems build resilience to a changing climate.

The Southern Ocean not only teems with life, but also helps regulate the global climate, driving ocean circulation that carries oxygen-rich waters and nutrients supporting marine life and fisheries in much of the world’s oceans. One of the foundations of the Antarctic ecosystem — krill — is a food source for that ecosystem, and through its life cycle also helps lock up 23 million tons of carbon dioxide annually from the earth’s atmosphere, the equivalent to greenhouse gases produced annually by 35 million cars.

But Antarctica is one of the fastest warming places on the planet, which will have repercussions both within and far from its icy waters. In January, the first ever reported heat wave hit the seventh continent in East Antarctica, where a few months later a melting hot spot was identified under the Shirase Glacier. Most recently, researchers have revealed that 60 percent of Antarctic ice shelves are at risk to fracture, a loss that would cause catastrophic sea level rise to coastal cities and devastating destruction to the Southern Ocean ecosystem.

We already have a blueprint that can help reduce harmful impacts on marine ecosystems. Four years ago, the Commission for the Conservation of the Antarctic Marine Living Resources (CCAMLR), the body responsible for governing the Southern Ocean, created the world’s largest marine protected area in the Ross Sea — a vast deep bay off Antarctica considered the southernmost sea on Earth. This move united allies, rivals and adversaries — including the United States, Russia and China — to demonstrate that, despite political tensions in other parts of the world, the Antarctic continues to be a global common dedicated to peace, science and conservation. 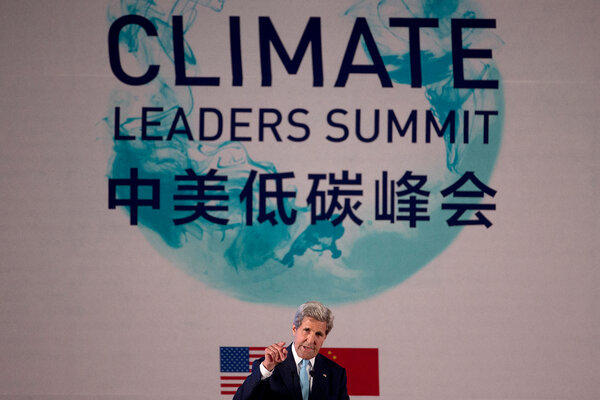 In the lead-up to the 2016 agreement, I worked closely with my counterparts in China. In 2012, the Chinese government had enshrined in its constitution the concept of “Ecological Civilization” and President Xi Jinping had argued that the economy and the environment were directly linked.

We had already forged joint cooperation on climate change, through President Barack Obama and President Xi’s joint announcement of each country’s emissions reductions ambitions ahead of the Paris Climate Accord, breaking a decades-long logjam. China was becoming a more vocal advocate for addressing climate change at home and abroad.

Today, the world is watching our two countries again on this issue — with some skepticism. We now have an opportunity to go further and join together in a new groundbreaking initiative that would dispel doubt about the global commitment to oceans-based climate solutions. Governments within the commission are meeting to decide on new marine protected areas in the Antarctic, and progress depends on whether China decides to join 24 countries and the European Union that already support approval. The commission operates on consensus, and all members must agree to stop fishing in these designated areas for the new marine parks to become a reality. The rest of the Southern Ocean remains open for regulated fishing activity.

Now is not the time to call into question commitments made on global environmental protection, or diminish the role multilateral platforms play in providing a foundation for global, science-based collaboration.

China has it fully within its power to make this achievement a reality. Success would belong to all nations, despite our differences — but most importantly it would be a success for future generations who count on us to secure a victory over climate change in their name.

John F. Kerry served as U.S. secretary of state from 2013 to 2017 in the Obama administration and was a United States senator from Massachusetts from 1985 to 2013.