The Black press was at the peak of its influence as the country geared up for World War II — while segregating even the plasma in the wartime blood bank by race. Fire-breathing newspapers like The Baltimore Afro-American, The Chicago Defender and The Pittsburgh Courier were religiously passed from home to home and read aloud in Black barbershops. Even the marginally literate understood that Black men who had volunteered to fight and die for the country were being persecuted on military bases and housed in Jim Crow barracks.

Franklin Roosevelt argued that full integration of the military would harm the defense effort. The Courier’s acid-tongued editors had no tolerance for this defense of the status quo. In the fall of 1940, the Pittsburgh paper troubled the president’s sleep by publishing an incendiary letter of complaint from 15 sailors serving aboard the U.S.S. Philadelphia. The sailors may have been lured into the Navy with the false promise that they could pursue the same careers as white recruits. Instead, they were assigned to duty as messmen, making beds, shining shoes and serving meals to white officers.

The Navy secretary, William Franklin Knox, openly justified this arrangement on the eve of the war. Speaking to a gathering at the White House, he told a delegation of civil rights leaders that he could not “enlist Negroes above the rank of messman” because it was impossible to segregate men by race within the intimate confines of a ship. With no way to wall off Black sailors, the argument went, the Navy’s only choice was to confine them to a servant class.

The Philadelphia 15 letter conveyed the anguish of Black seaman who had met this fate — some after leaving college to join up. “Our main reason for writing,” the letter began, “is to let all our colored mothers and fathers know how their sons are treated after taking an oath pledging allegiance and loyalty to their flag and country.’’ The letter spoke of messmen being kicked around and unfairly jailed. The passage that was heard around the world in 1940 — and that is still quoted today — warned Black parents to steer their ambitious sons far clear of the Navy, lest they become “seagoing bellhops, chambermaids and dishwashers.”

The Navy jailed the letter writers and discharged them dishonorably, triggering a tidal wave of protest.

The Navy touched on this largely forgotten history in January when it named its newest aircraft carrier for the Texas sharecropper’s son who vexed segregationists by becoming one of the first heroes of the war.

Mess Attendant Doris Miller, known as Dorie, was collecting laundry aboard the battleship U.S.S. West Virginia when the Japanese attacked the American fleet at Pearl Harbor on Dec. 7, 1941. He vaulted to the bridge, where he aided the ship’s mortally wounded captain. He fired on Japanese planes with an antiaircraft gun that, as a servant, he had not been trained to use, and pulled men who would otherwise have died from the burning, oil-coated waters of the harbor. He was one of the last sailors to leave the foundering ship. 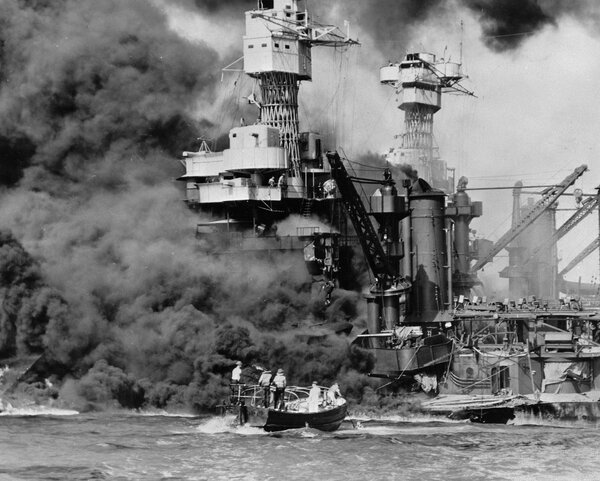 Legislation that would have granted the Black messman the Medal of Honor died in Congress. Despite a distinguished service record that would have transformed a white serviceman’s career, Dorie Miller was serving as a cook when he died two years later in the Pacific. He had a premonition of death not long before a Japanese submarine torpedoed and sank his ship, the U.S.S. Liscome Bay.

The U.S.S. Doris Miller — scheduled for delivery in 2032 — is an unmistakable emblem of racial progress. It attaches the Black messman’s name to a class of supercarriers that already honors Presidents Gerald Ford and John Kennedy. It has the dual distinction of being the first carrier named for an enlisted sailor and the first named for an African-American. That the ship celebrates a descendant of enslaved Americans is especially resonant at a time when the country is poised to rename military bases that currently honor the very Confederate officers who fought the Civil War with the goal of preserving slavery.

To commemorate Dorie Miller’s story truthfully, America will need to strip away the rose-colored mythology that obscures it. A nostalgia that the cultural historian Robert K. Chester describes as “retroactive multiculturalism” has transformed the messman’s story from a truthful tale of racial exclusion into a false allegory of triumph over a brand of institutional racism that long outlived him. In truth, Mr. Chester writes, “Segregation remained widespread well into the Korean War, diminishing then chiefly because of manpower shortages.”

Nevertheless, the messman is often cited as evidence that World War II — also known as the “good war” — precipitated a national epiphany on the need for racial equality. One of the best-known purveyors of this myth was Ronald Reagan. One of his favorite 1970s campaign narratives included a thrilling anecdote in which a Black sailor confined to “kitchen duties” ended “great segregation” by firing a machine gun at the enemy.

The Navy’s chief of operations, Adm. Elmo Zumwalt, was telling a different story at the start of the ’70s: He described the institution under his care as “the lily-white racist Navy.” Faced with shipboard conflicts and a recalcitrant management class, Admiral Zumwalt set about trying to root out racism. Amid this turmoil, the Navy gave Dorie Miller’s name to a destroyer escort that was decommissioned less than 20 years later and eventually scrapped.

The segregation-era military equated heroism with whiteness. The messman would probably not have been decorated at all had not the Black press and the civil rights community hammered down the door of the White House.

A few months later, The Courier named the mess attendant, describing him as a Texas sharecropper’s son. The paper instigated a campaign in which readers wrote to the president, demanding that he be sent to the Naval Academy for training.

Navy Secretary Knox tried to settle the matter with a terse letter of commendation. Under pressure from The Courier — and a nudge from Attorney General Nicholas Biddle — Roosevelt belatedly pushed the Navy to award Dorie Miller the Navy Cross.

The campaign to win him the Medal of Honor foundered, partly because Mr. Knox steadfastly opposed it. In recent decades, those who have studied the case have often contrasted Dorie Miller’s valorous actions at Pearl Harbor with the deeds of the 15 white men who received Medals of Honor for their conduct on that day.

As recently as two years ago, the historians Thomas W. Cutrer and T. Michael Parrish made the case that “Doris Miller’s exploits aboard West Virginia were at least of equal distinction” to those of the white Navy men. Among those honored posthumously was Mervyn Sharp Bennion, the dying captain whom the messman aided as the ship was sinking. Bennion was incapacitated during the attack and was awarded the Medal of Honor because he “strongly protested” being removed from his post.

As Mr. Cutrer and Mr. Parrish write: “every flag or commanding officer who died at Pearl Harbor received the Medal of Honor for doing essentially what he was expected to or, in most cases it seems, for being unable to do very much.” Dorie Miller, by contrast, acted well outside his role as shipboard servant, consistent with the Medal of Honor definition of conduct “above and beyond the call of duty.”

The decision to name the new supercarrier for Miller reflects the Navy’s desire to break with its egregiously racist past. In pursuing this goal, however, the leadership needs to steer clear of the fable that casts the Black mess attendant’s story as one of victory over segregation. The whole, unpleasant truth is that segregation circumscribed the lives of Black servicemembers throughout the so-called good war.