Much has been made of the high-profile Republican defectors from President Donald Trump in the upcoming U.S. election.

Some of the most effective anti-Trump advertising this year comes from the Lincoln Project, helmed by a group of prominent Republican strategists who have broken ranks and are campaigning against him.

These prominent Republican desertions led some to wonder if it would spur a broader shift away from Trump among the party’s rank and file. But that does not appear to be the case. Trump’s approval rating with Republicans remains high and the support from his base is essentially unchanged from 2016.

The real story is that Biden is outperforming Hillary Clinton among Democrats.

In 2016, Americans had considerable trepidation about both main party candidates, leaving many undecided up until the final weeks and days of the election. When undecided voters broke for Trump in a handful of key swing states, they helped hand him the Electoral College, despite his loss of the popular vote.

Some opted out altogether, with 11 per cent to 12 per cent of partisans choosing to not vote for their party candidate, according to the 2016 exit polls.

The context is very different in 2020 for a host of reasons, from the pandemic to views about the two main candidates being more fixed at this point. With the election just a few weeks away, the pool of undecided voters is already much smaller.

In another crucial difference, Democrats more decisively back Biden this election cycle. 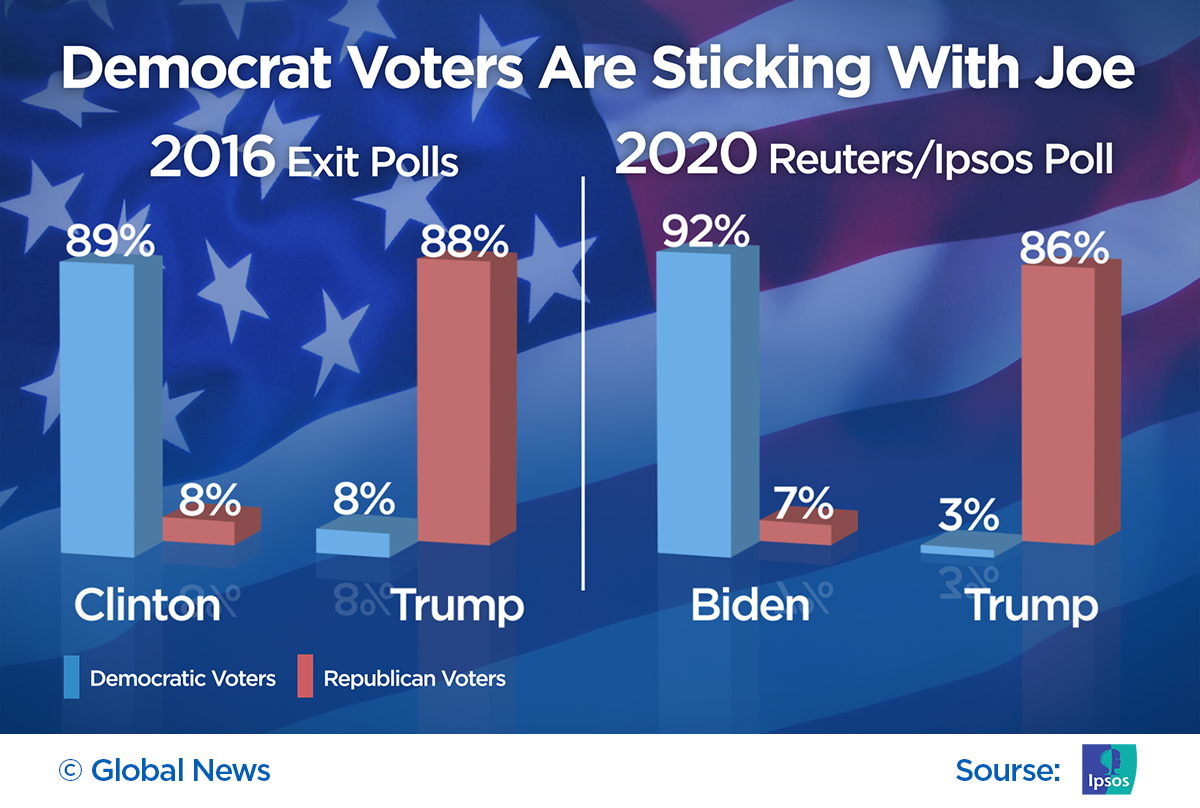 How is Biden proving to be so resilient this election cycle?

The signals suggest that Biden is more effectively unifying the Democratic party behind him than Clinton did in 2016.

It is no secret that Trump is a polarizing figure. While his Republican base supports him through thick and thin, he has alienated a broad swath of the rest of the electorate, as seen in his 53 per cent job disapproval rate with all registered voters. Among Democrats, opposition to Trump is especially strong with 78 per cent of Democratic registered voters strongly disapproving of his job performance.

That level of hostility is intense and it is activating. Polls this year show that Democrats’ intent to vote is now on par with Republicans, who in past election cycles outpaced Democrats on that score.

In 2016, Trump was helped by the fact that he was running against another polarizing figure. Biden is the antithesis of polarizing. He is an older straight white man who was a loyal and supportive vice president to the first Black American president, and who has a long record of moderate Democratic policymaking. His personal identity is non-threatening, and his track record is neutral and flexible enough to accommodate both the moderate and more liberal wings of his party.

In this election, that may be the right place to be. This election will be a referendum on Trump, his character, and his handling of the coronavirus pandemic. He is the centre of this election, with his base fired up to vote for him, and his detractors to file a protest vote against him. Against this, Biden stands as a benign alternative with nothing so controversial as to pull focus from the president’s continued outbursts.

Chris Jackson is senior vice president and head of polling at Ipsos. Catherine Morris is a data journalist with Ipsos’ public polling practice.