When the Centers for Disease Control and Prevention released new guidelines last month for mask wearing, it announced that “less than 10 percent” of Covid-19 transmission was occurring outdoors. Media organizations repeated the statistic, and it quickly became a standard description of the frequency of outdoor transmission.

But the number is almost certainly misleading.

It appears to be based partly on a misclassification of some Covid transmission that actually took place in enclosed spaces (as I explain below). An even bigger issue is the extreme caution of C.D.C. officials, who picked a benchmark — 10 percent — so high that nobody could reasonably dispute it.

That benchmark “seems to be a huge exaggeration,” as Dr. Muge Cevik, a virologist at the University of St. Andrews, said. In truth, the share of transmission that has occurred outdoors seems to be below 1 percent and may be below 0.1 percent, multiple epidemiologists told me. The rare outdoor transmission that has happened almost all seems to have involved crowded places or close conversation.

Saying that less than 10 percent of Covid transmission occurs outdoors is akin to saying that sharks attack fewer than 20,000 swimmers a year. (The actual worldwide number is around 150.) It’s both true and deceiving.

This isn’t just a gotcha math issue. It is an example of how the C.D.C. is struggling to communicate effectively, and leaving many people confused about what’s truly risky. C.D.C. officials have placed such a high priority on caution that many Americans are bewildered by the agency’s long list of recommendations. Zeynep Tufekci of the University of North Carolina, writing in The Atlantic, called those recommendations “simultaneously too timid and too complicated.”

These recommendations would be more grounded in science if anywhere close to 10 percent of Covid transmission were occurring outdoors. But it is not. There is not a single documented Covid infection anywhere in the world from casual outdoor interactions, such as walking past someone on a street or eating at a nearby table.

Today’s newsletter will be a bit longer than usual, so I can explain how the C.D.C. ended up promoting a misleading number.

If you read the academic research that the C.D.C. has cited in defense of the 10 percent benchmark, you will notice something strange. A very large share of supposed cases of outdoor transmission have occurred in a single setting: construction sites in Singapore.

This obviously doesn’t make much sense. It instead appears to be a misunderstanding that resembles the childhood game of telephone, in which a message gets garbled as it passes from one person to the next.

The Singapore data originally comes from a government database there. That database does not categorize the construction-site cases as outdoor transmission, Yap Wei Qiang, a spokesman for the Ministry of Health, told my colleague Shashank Bengali. “We didn’t classify it according to outdoors or indoors,” Yap said. “It could have been workplace transmission where it happens outdoors at the site, or it could also have happened indoors within the construction site.”

As Shashank did further reporting, he discovered reasons to think that many of the infections may have occurred indoors. At some of the individual construction sites where Covid spread — like a complex for the financial firm UBS and a skyscraper project called Project Glory — the concrete shells for the buildings were largely completed before the pandemic began. (This video of Project Glory was shot more than four months before Singapore’s first reported Covid case.)

Because Singapore is hot year-round, the workers would have sought out the shade of enclosed spaces to hold meetings and eat lunch together, Alex Au of Transient Workers Count Too, an advocacy group, told Shashank. Electricians and plumbers would have worked in particularly close contact. 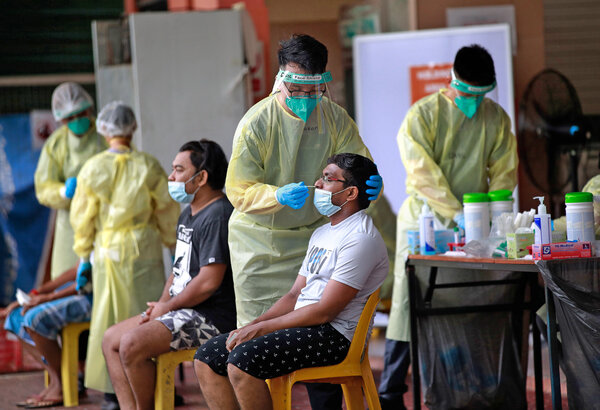 How, then, did the Singapore cases get classified as they did?

When academic researchers began collecting Covid data from around the world, many chose to define outdoors spaces very broadly. They deemed almost any setting that was a mix of outdoors and indoors to be outdoors.

“We had to settle on one classification for building sites,” Quentin Leclerc, a French researcher and co-author of one of the papers analyzing Singapore, told me, “and ultimately decided on a conservative outdoor definition.” Another paper, published in the Journal of Infection and Public Health, counted only two settings as indoors: “mass accommodation and residential facilities.” It defined all of these settings as outdoors: “workplace, health care, education, social events, travel, catering, leisure and shopping.”

And yet even with this approach, they found a minuscule share of total transmission to have occurred outdoors. In the paper with 95 supposedly outdoor cases from Singapore, those cases nonetheless made up less than 1 percent of the total. A study from Ireland, which seems to have been more precise about the definition of outdoors, put the share of such transmission at 0.1 percent. A study of 7,324 cases from China found a single instance of outdoor transmission, involving a conversation between two people.

“I’m sure it’s possible for transmission to occur outdoors in the right circumstances,” Dr. Aaron Richterman of the University of Pennsylvania told me, “but if we had to put a number on it, I would say much less than 1 percent.”

I asked the C.D.C. how it could justify the 10 percent benchmark, and an official there sent this statement:

There are limited data on outdoor transmission. The data we do have supports the hypothesis that the risk of outdoor transmission is low. 10 percent is a conservative estimate from a recent systematic review of peer-reviewed papers. CDC cannot provide the specific risk level for every activity in every community and errs on the side of protection when it comes to recommending steps to protect health. It is important for people and communities to consider their own situations and risks and to take appropriate steps to protect their health.

Erring on the side of protection — by exaggerating the risks of outdoor transmission — may seem to have few downsides. But it has contributed to widespread public confusion about what really matters. Some Americans are ignoring the C.D.C.’s elaborate guidelines and ditching their masks, even indoors, while others continue to harass people who walk around outdoors without a mask.

All the while, the scientific evidence points to a conclusion that is much simpler than the C.D.C.’s message: Masks make a huge difference indoors and rarely matter outdoors.

The health authorities in Britain, notably, seem to have figured this out. They have been more aggressive about restricting indoor behavior, locking down many businesses again late last year and requiring masks indoors even as most of the country is vaccinated. Outdoors, however, masks remain rare.

It certainly doesn’t seem to be causing problems. Since January, daily Covid deaths in Britain have declined more than 99 percent.

The Israeli police raided the Aqsa Mosque, one of Islam’s holiest sites, after days of protests there. At least 330 Palestinians and 21 Israeli officers were injured. (Here’s a history of the Aqsa Mosque.)

In response, Hamas militants fired rockets at Jerusalem that caused no injuries.

The F.B.I. blamed DarkSide, a criminal gang, for a cyberattack on a major gas pipeline.

The Biden administration will prohibit health care providers from discriminating against gay and transgender people.

Glenn Youngkin, a first-time candidate, won the Republican nomination for governor of Virginia.

China’s population is growing at its slowest pace in decades, which could stunt economic growth.

NBC said it would not air the 2022 Golden Globes, after several major studios criticized the lack of diversity of the show’s organizer.

Times columns by Ross Douthat and Thomas Friedman and a guest essay by Carmen Maria Machado.

Commute nostalgia: An ode to the cramped train ride to Manhattan.

Almonds, oats, rice: Are plant milks good for you?

A Times classic: Here are the climate risks facing your country.

Lives Lived: Critics called the postmodern buildings of the architect Helmut Jahn “dazzling,” “convention-busting” and “unrelated to anything else in the whole of Western civilization.” He died at 81.

A brief history of modern beauty

For T Magazine’s beauty issue, writers broke down four subjects — hair, skin care, fragrance and makeup — that have changed over the decades. There are essays on the ’90s-era advances in weaves, wigs and other Black hairstyles, as well as the rise in people of all genders embracing makeup.

“Who gets to be beautiful now?” Hanya Yanagihara, T Magazine’s editor in chief, asks. “Anyone who believes themselves to be so.” Find the full issue here.

Let your oven do the heavy lifting with sheet-pan pierogies, brussels sprouts and kimchi.

See the Russian republic of Kalmykia, where encroaching desert has transformed the landscape.

In the legal thriller “While Justice Sleeps,” Stacey Abrams takes on the Supreme Court, biotech and blackmail.

The hosts joked about Medina Spirit.

The pangram from yesterday’s Spelling Bee was humbled. Here is today’s puzzle — or you can play online.

Today’s episode of “The Daily” is about the feud between Apple and Facebook. On “Popcast,” women in country music.